Hey guys!  I am definitely looking forward to February 2019.  As the year continues forward, I am starting to plan some additional photo shoots with the first couple starting February.  I am hoping to conduct a few photo shoots per month, including some TFP shoots, and have an overall goal of completing at least 24 shoots this year.  Of course, I am planning on reaching out to some of the guys that I have photographed before to see if they are interested in another shoot, but I am looking forward to photographing some new guys.

If you're interested in my work, definitely check back for some new images of new guys.  I am definitely planning on making updates to the website on a routine basis.

Anyway, on to the reason you guys have stopped by – Emiliano.  After the first photo shoot, he reached out to me to see if I was looking for models. During the first photo shoot, I found myself being fascinated with his overall look and general moodiness as it translated into still images.  So yeah, I definitely jumped at the opportunity to set up a second photo shoot with him and was pleased with the final images.

As usual, the following images are my favorites from the second photo shoot with Emiliano and some insight on why the image was chosen for the specific category.

As with every photo shoot, I photographed Emiliano in the clothes that he wore to the photo shoot.  In this instance, it was a black and white striped tank top, a pair of gray pants, and a baseball cap.  As I was reviewing the images, I kept coming back to the image below.  I love the relaxed, effortless pose and how it just seems like a capture of a random moment.  That feeling is further enhanced by the relaxed facial expression. Of course, there were times that I strove to get some facial expressions from Emiliano, but his relaxed facial expression works for me in this image.

As I mentioned, I also love the pose in the image. In particular, I love how his weight is resting more heavily on his left leg and how it introduces a curvature in the rest of his body.  I absolutely love how that curvature plays out down from his torso to his hips. More interestingly, I love how the black and white stripes create a prominent sense of separation between the fabric and his left arm, but also amplifies the curving line on his left side. I absolutely love how that shirt and the lines stand out in the black and white image.  It definitely made it easy for me to choose this image to highlight for this section. 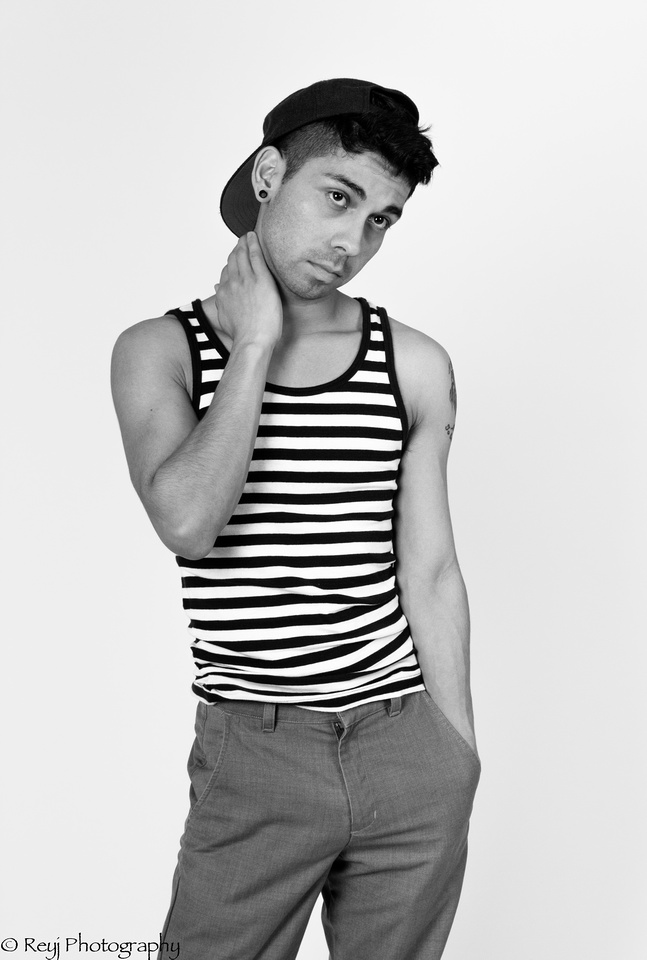 As usual, I also ended up getting some portraits during the second photo shoot with Emiliano.  Like I said before, sometimes it was hard to get some facial expressions from him, but I also liked how his relaxed, if somewhat serious, expression came out in black and white.  As I was looking through the catalog of finished images, I ended up choosing the image below to highlight.

For me, I ended up liking the image because of the position of his arms and how those lines ended up drawing more attention to his eyes. I also liked how his arms created a sense of positive and negative space, but still has a balanced feeling in the overall image.  But I mostly like the image because of the prominent catchlights in his eyes.  It just creates an intense look and I find myself captivated with the image.  So yeah, it was easy to select this image to highlight. 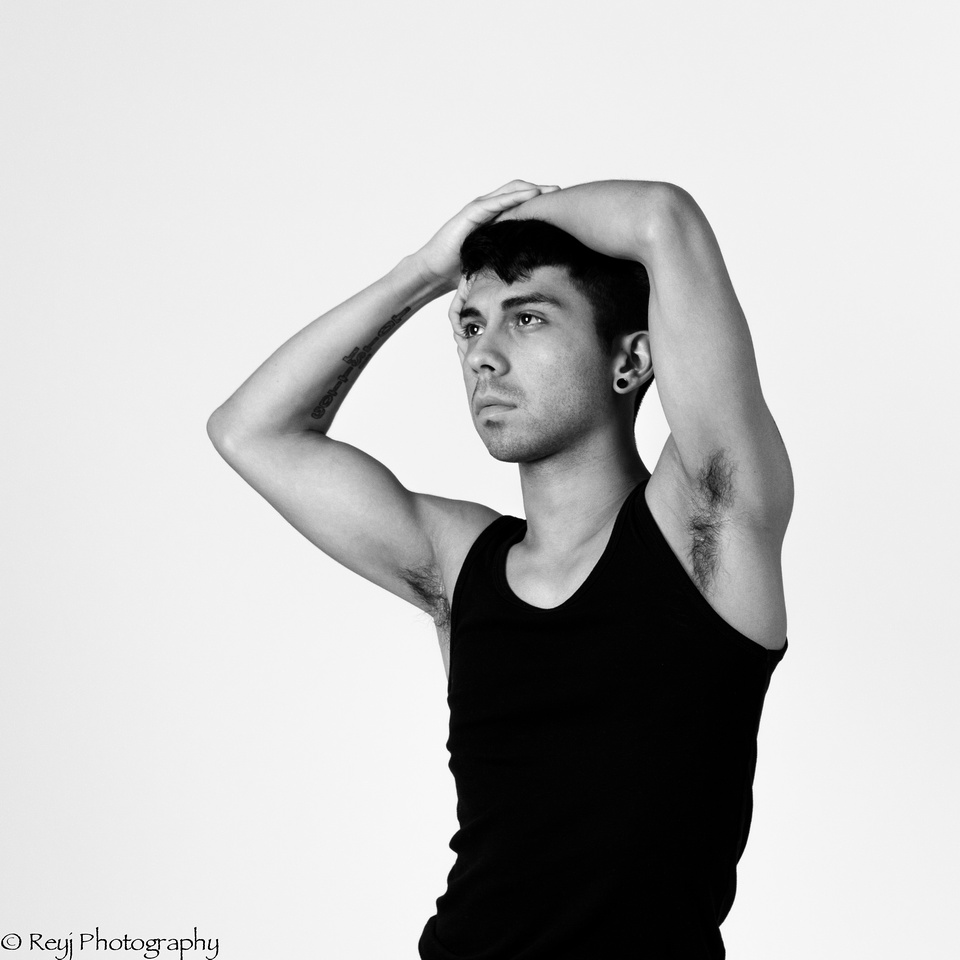 For the underwear portion, I had several options to highlight.  However, I ended up selecting the image below because of the overall look of the image and the pose.  Like in the image highlighted under the Street Clothing portion, I also like how his weight is resting more heavily on his right leg and introduces a curving line in his body.  This is further amplified with the slight twist of his shoulders and the positioning of his arms.  Yeah, I absolutely love the interplay of lines throughout the image.

Additionally, I love the balance of color in the image. Sure, it’s a black and white image, but I love that there are two solid blocks of color with the white of the tank top and the black of the Andrew Christian briefs, hair, and baseball cap. While I do love capturing simple and intense patterns in black and white images, there’s also something to be said of the simplicity of solid blocks of colors.  I definitely think it work to strike a sense of balance as well as adding some visual weight towards the bottom of the image.

I also like the overall sense of boredom that is displayed on his face.  Sure, it might have bothered me at other times, but I actually like the look in this image.  It creates a sense that Emiliano standing and being photographed in a pair of underwear is a not a big deal for this college student.  So yeah, I ended up liking the facial expression, especially the catchlights in his dark eyes, and made it easy to highlight the image when combined with my other reasons for liking it. 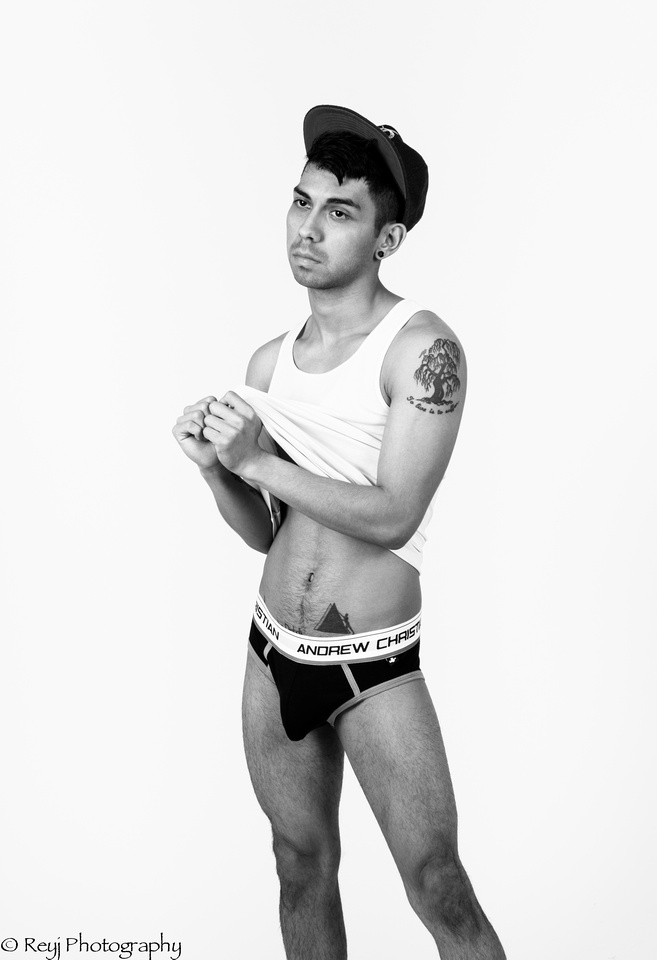 As with my other shoots, I photographed Emiliano in the nude.  As I was going through the images to select one to highlight in this section, the image below jumped out at me.  One of the reasons that I like the image is because it is a full-body image.  Normally, I end up cropping the image, but the pose lent itself to be displayed as a full-body shot.

Additionally, I love the details and positioning of his feet. Normally, I do not look at a model’s feet and completely ignore them during the editing process, but for some reason my eye was drawn to the curve of his toes on his left foot and the lines created from their positioning.  Yeah, I thought it was weird for that detail to capture my attention, but I find my eye being drawn to that small detail.

Finally, I love the image because of the look on Emiliano’s face.  Sure, I may be reading too much into the look and the overall pose, but, for me, there is a sense of vulnerability.  It is helped by slight turn and downturn of his head as well as the positioning of his leg and arm.  Overall, I love the sense of vulnerability and softness that is present in the image. 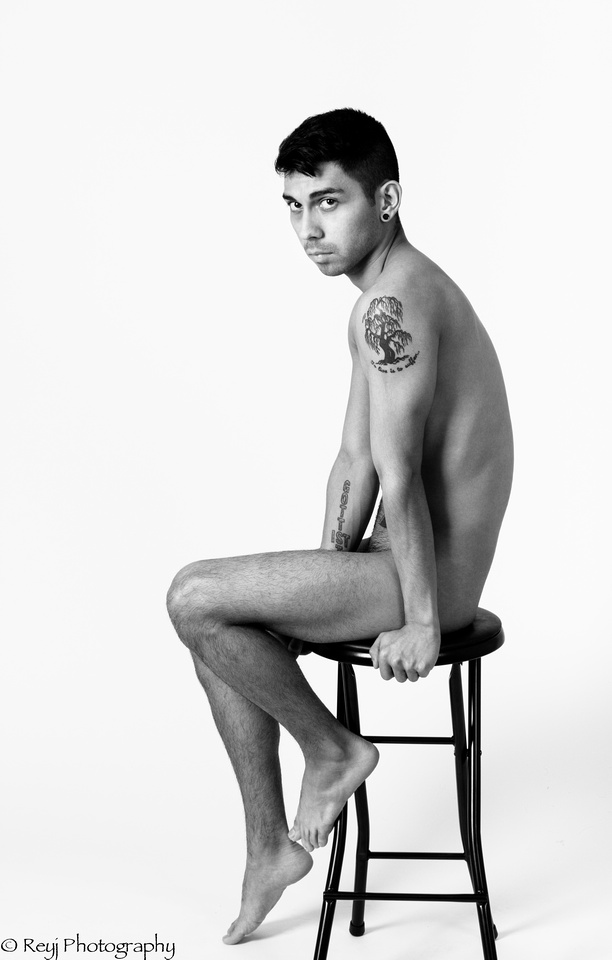 The image below is my overall favorite image from the second photo shoot with Emiliano.  For me, I was drawn to the lines created by his body, such as the subtle curving outside line as his thighs lead into his hips and then torso. I also like the line that his created as his hip and how it leads to his arm before heading back up the image.  As you guys know, I am always interested in how the lines within the image can direct a viewer’s eye throughout the image.

Additionally, I love the overall boldness of the image. It definitely takes someone comfortable with his body to create an image like this one.  However, there’s also a sense of modesty as Emiliano use his right hand to over himself, but he also uses his left hand to expose more of his torso. Yes, I am definitely in love with the dichotomy present within the image.

Finally, the image is my favorite because of the handling of the gray tones.  I love the interplay between the shadows, highlights, and mid-tones throughout the image. Yeah, when it’s all taken together, it was easy for me to select this image as my overall favorite image from the photo shoot. 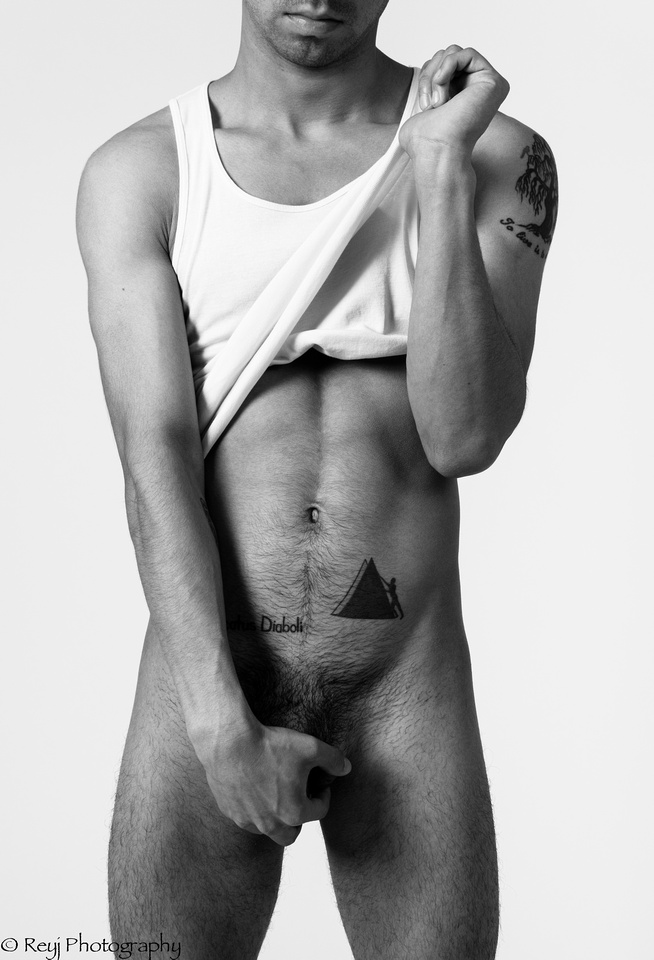 Overall, I liked working with Emiliano throughout the second photo shoot.  I am happy with how the images turned out, especially since they have a different feel to them as opposed to the images from the first photo shoot.  Because of that and the general easiness of working him, I ended up photographing Emiliano a third time before he moved out to the West Coast.  That gallery and blog entry will be forthcoming.

If you are interested in setting up a shoot here in Austin, Texas, please email me at [email protected]!