Hey guys!  It's been a quiet week for me, even though I officially started in my new job.  But it's a little hard to be excited about it since I've been doing the job for long time now.  So yeah, I'm feeling a little jaded towards the job, even though we got some new projects to work on for the upcoming year.  Even with all of that, I'm definitely wishing that August goes by a little quicker.

I am spending a couple of hours a week to watch the latest movies coming out.  Today, I saw DC's Suicide Squad.  I will admit that I'm not much of a DC fan, but I found myself entertained throughout the movie.  Sure, the plot was somewhat questionable, but I do like rooting for the underdog and seeing them come out on top.  Additionally, I loved Harley Quinn and El Diablo in the movie.  Harley was just bat-shit crazy and fun, but I found myself loving the character of El Diablo even more - especially when you got the backstory to why he was weary of using his powers.  To me, he was definitely one of the more fleshed out characters in the movie.  Plus, he had some awesome fire-based powers, particularly when he took on the bad guy towards the end.  Yeah, he definitely spoke to the inner pyro in me!  Nonetheless, I would definitely recommend seeing it since it was entertaining.  Was it the best movie that I've seen this year?  No, but it ticked off the marks for my comic book nerd tendencies to make the movie enjoyable for me.

However, I am looking forward to starting the fall semester at the local community college college.  As I mentioned in a few blog entries, I'm putting my master's degree on hold for a bit since I'm working full-time and can't seem to give the degree the attention it should have.  So yeah, in order to keep myself busy, I'm going to be taking a couple of photography classes at local community college.  They won't start until the last week of August, which isn't that far away, but I'm definitely wishing that it would get here already.  I'm looking forward to having some excitement in my life instead of just working and worrying about the job.  Plus a creative outlet!  So yeah, it's going to be awesome to be taking the two photography courses and the third course.  I'm definitely looking forward to expand my photography knowledge as well as getting some studio time in.

So yeah, moving on to the reason that you guys are here - Ryan!  As I mentioned in the previous blog entry, I had decided to go down to San Antonio for a long weekend to get away.  Booking a suite in one of the hotels along the River Walk, I used it as a base of operations while  I was there.  It definitely was a good thing since I was able to wander around the area without needing to walk through any shady areas.  More importantly, the hotel suite gave me the space to conduct a couple of photo shoots while I was there.  Of course, one of those photo shoots was with Ryan.

I definitely loved working with Ryan.  When he submitted his pics, I was instantly drawn to his overall look, especially the tattoos along his arms.  To me, it was an interesting look that I wanted to capture.  As we talked throughout the photo shoot, I found out that he had been in the process of transforming his body through some serious cross-fit training at one of the local gyms.  Plus, he also told me that he played in a local band in his spare time.  Like I said, I definitely found Ryan interesting and fun to work with throughout the shoot - probably why I have worked with him twice and am hoping to work with him again in the future!

When Ryan showed up, he was wearing a t-shirt and a pair of jeans.  It did crack me up that his shirt said "Bad Boy" since I had thought when he first submitted his images.  Nonetheless, I definitely liked the look that Ryan presented in his street clothes and how it helped to create the overall image of the Latin Bad Boy, even if there were hints of the Boy Next Door look as well.  It was definitely an appealing look, which is probably why I ended up selecting several images from this phase of the photo shoot as my favorites.

For this section, it was easy for me to select the image below as my favorite.  As I mentioned, I love the overall look.  Moving beyond the Bad Boy t-shirt and jeans, I also love his pose.  Sure, it's a straight forward pose, but it's also classic.  There's definitely a sense of ease present in his stance (and throughout the photo shoot) as well as a sense of amusement in his facial expression, particularly in the subtle smile.  Additionally, I love the placement of his hands in the image.  I like how his left hand is mostly in his pocket with only the thumb visible, but it's the complete mirror opposite with his right hand.  It's those little details that help to catch my attention.

Finally, I like the lighting in the image.  Moving away from the split lighting, I had placed the light source so that it would bath him in light.  I definitely love how it bathes his face in light before moving into the deep shadows on the right side of his face.  Plus, the catchlights in his eyes are mesmerizing.  Yeah, I'm definitely happy with the lighting in the image overall. 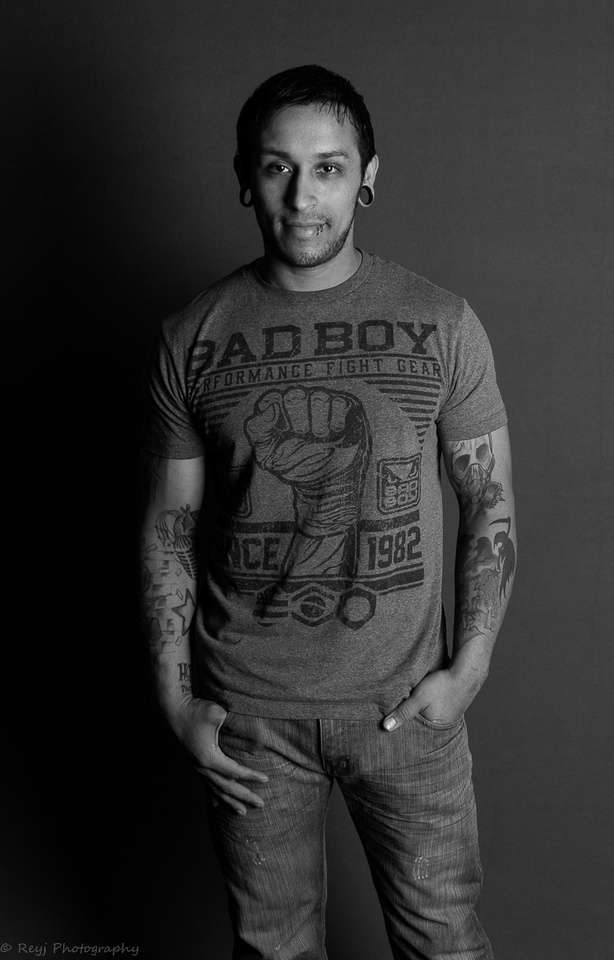 Of course, I also selected one of the images from this portion of the photo shoot as my favorite portrait from the shoot.  I will say that Ryan is stunning looking, especially his eyes.  When I first saw the image below, it definitely stopped me in my tracks.  Now, every time that I look at the image, I'm automatically drawn to his eyes.

As with the image above, I definitely love the lighting and the pose in the image.  For the pose, I had Ryan positing his body away from the light and then made modifications, such as turning his shoulders and face towards the light, to maximize the light.  I will admit that I like how the turn of his shoulders create the visual depth through their span.  Additionally, I like how the shadowed area creates a counter balance to the highlighted area.  It definitely helps to balance out the image without it feeling too heavy.

Finally, I love how Ryan looks serious as he looks over his shoulder.  The light definitely looks amazing on his face, especially in the area around his eyes.  Like above, the catchlights in his eyes are mesmerizing.  But I also like how the light seems to accentuate the shadows under his eyes to create a smoky look.  Between the light and his serious expression, it was definitely easy to select the image as my favorite portrait from the photo shoot.  At least, it's a portrait that certainly caught my attention. 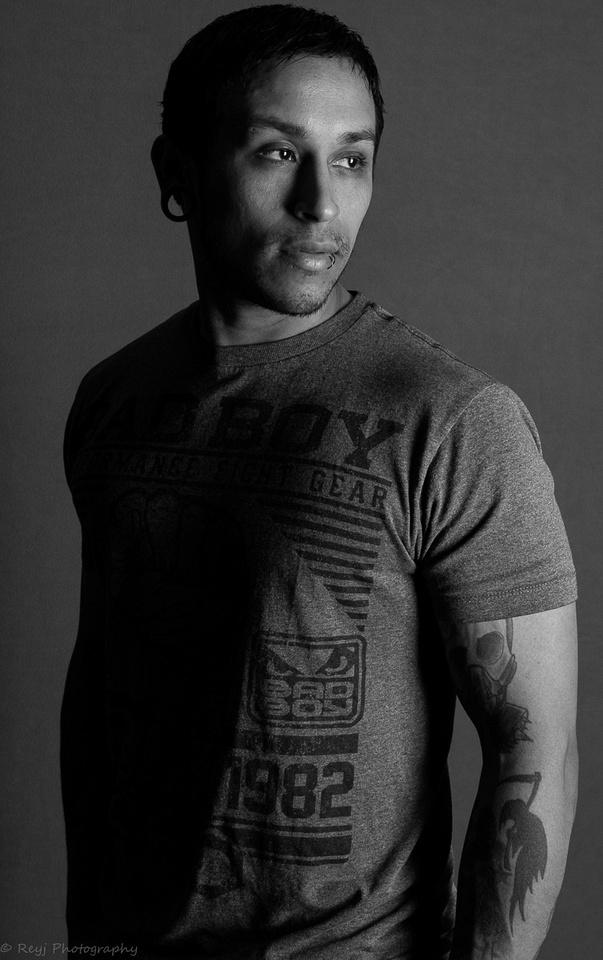 As with the other photo shoots, I did photograph Ryan in a variety of underwear throughout the shoot.  For this section, I selected the image below as my favorite.  Of course, I love how Ryan looks in the black Papi boxer briefs, especially with how the lines of his hips seem to lead the viewer's eye down to the Papi logo on the boxer briefs.

However, it's definitely the pose that helps to make the image below my favorite from the shoot.  I like the kneeling pose and how the lines on the bed seem to be directing the viewer's eye towards his thighs.  More importantly, I love the sense of power that is evident in his body through the pose.  Through the visual display of his chest, shoulders, and upper arms, the strength in his muscles to be present in the image and carries with it a sense of confidence.  Additionally, I love how his head and gaze is directed off screen, which helps to create some visual interest in the image as well. 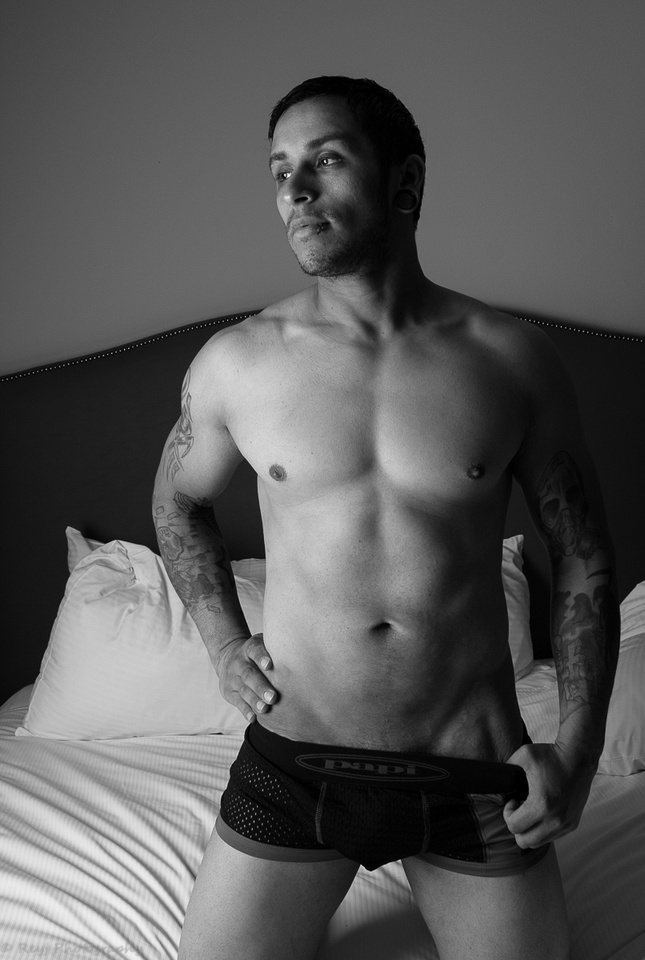 My favorite image from the photo shoot comes from the beginning of the photo shoot.  Surprisingly, it's not a black and white image.  For this photo shoot, I had decided to play around with several images in PhotoShop and soften the colors through an opacity filter.  There are several images within the gallery (http://www.reyjphotography.com/ryan) that has the same color treatment.  I definitely ended up liking how the colors were softened, particularly in his skin tone as well as his jeans.

In addition to the color treatment, I like the pose and feeling of the image.  There is definitely a sense of superiority present in his facial expression, but I'm probably reading into the image.  However, when his serious facial expression is combined with the pose, I definitely feel that sense of superiority.  I like how the belt looked draped around his neck and how his hold helps to draw attention to the strength in his right bicep.  Furthermore, the display of the muscles in his chest adds to the sense of strength that radiates throughout the image.  There's definitely a feeling that the viewer should approach with a sense of caution, even if Ryan is sweet and friendly.

For me, it was definitely easy for me to select the image below as my favorite from the photo shoot. 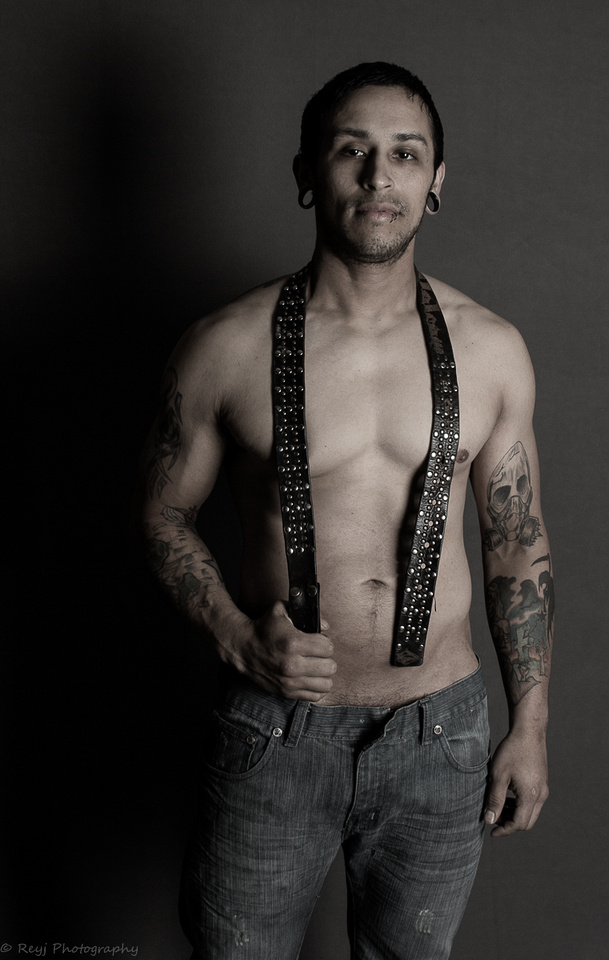 If you want, you can also check out my Instagram at http://www.instagram.com/reyj.photography.  I tend to post images daily!

If you are interested in setting up a photo shoot or letting me know what you think about my work, you can email me at [email protected].