Hey guys!  It's been a quiet week for me.  I've been preparing to assume my duties since I officially start in my new position tomorrow.  Sure, it's not a major change for me since I've been covering those duties for a while now, but I am excited to be officially over my new area and leading my team forward.  I've got some jitters since I am officially response for all of the marketing and outreach activities for my program, but I'm looking forward to the new challenges.  So yeah, I've been psyching myself up for tomorrow!

On top of that, I'm been thinking about the classes that I'm going to be taking in the upcoming semester.  At the moment, I've signed up to take a Portrait Photography course.  I'm a little nervous about it.  It's been a while since I've actually taken a photography course and submitting my work for a grade.  Sure, in the past, I've gotten some pretty good comments and grades on my work.  I'm not really worried about that; I'm just thinking about how I'm going to need to coordinate models to help me out with the assignments.  Plus, I really need to do some networking to get in some good graces with local make-up artists since I'm pretty sure that I will end up needing to photograph a female model for an assignment.  I should probably brush up on lighting techniques that looking flattering on women instead of my love for dramatic lighting for men.  Still, I'm looking forward to the class since it'll help me out in the future.

On to the reason that you guys are here - Sergio!  He was actually the first model that I photographed in 2014.  In February 2014, I had decided that I needed to get out of Austin for a while and eventually decided to take a long weekend trip to San Antonio.  Thinking about the photo shoots that I had done in June 2013, I definitely wanted to see if I could work with some male models while I was down there.  I did change it up though; last time, I had stayed in a hotel suite a couple of blocks from the River Walk.  It wasn't necessarily the best place to enjoy the River Walk from since I had to walk through some slightly shady areas to reach the River Walk.  Don't get me wrong, the hotel from the June 2013 photo shoots was definitely a gorgeous, historical place with a lot of charm.   However, for this trip, I was definitely looking to book a hotel suite on the River Walk.

During the February 2014 trip, the hotel suite that I stayed in definitely had a nice atmosphere to it.  It had some Spanish charm and furniture that definitely made the stay a pleasure.  Of course, when I booked the hotel suite, I was basically looking for a nice suite that would give me a base of operations while allowing me to have the space to do a couple of photo shoots.  Needless to say, I was definitely happy with the accommodations since I was able to hold two photo shoots there during my February 2014 trip to San Antonio.

It was my luck that I was able to work with Sergio during that trip.  While we didn't connect as well as some of the guys that I have worked with in the past, it was still a comfortable photo shoot with some easy conversation flowing between us.  More importantly, I was impressed with his physique and overall look.  Additionally, he had done a couple of photo shoots before and knew what I was looking for when I asked him to move this way or that.  Overall, I loved working with Sergio and am happy with the images that came from the shoot.

Like my previous photo shoots, I started by photographing Sergio in the clothes that he wore to the shoot.  When he showed up, he was wearing a black muscle shirt that showed off his impressive arms as well as a pair black pants.  While I do have some images of him in the muscle shirt in the gallery dedicated to him (http://www.reyjphotography.com/sergio), I decided to highlight the image of him posing shirtless while still wearing his black pants.

However, I absolutely love the lighting in the image.  I love how the lighting is coming in from the opposite direction from where his body is facing.  Through that placement, it creates a wrapping effect as the light sweeps across from the right side of the image before tapering off into shadows.  However, that light helps to create some interesting mid tones and shadows that highlight the muscles in his chest and abs - especially his abs.  Additionally, I love how the light sweeps across his face and there's enough light to highlight his right eye while the rest is casted in shadow.  For me, the lighting definitely one of the top reasons why I ended up selecting the image below to highlight for this section. 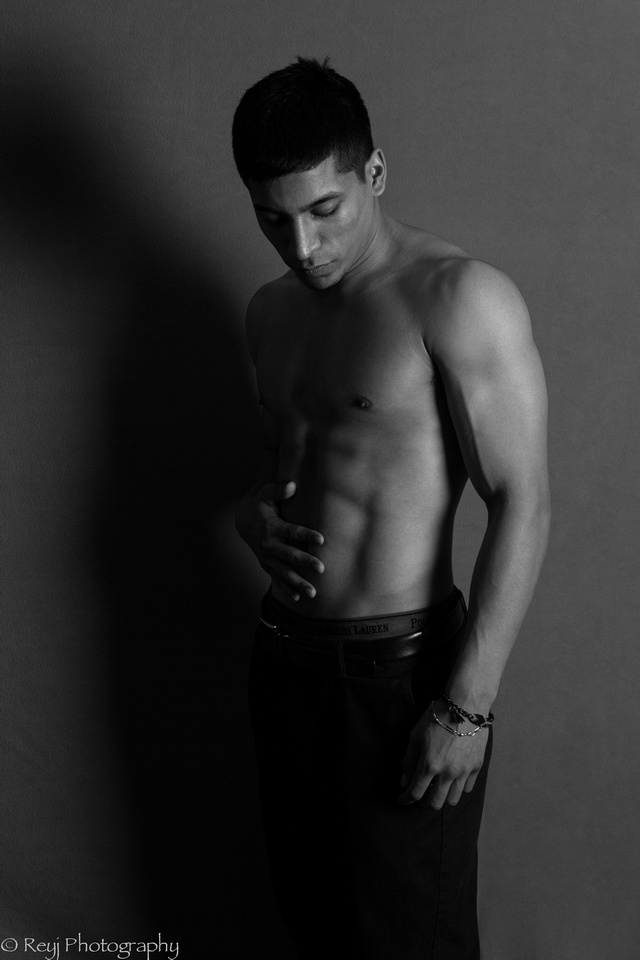 Additionally, I ended up choosing the image below to highlight for the underwear section because of the feeling a comfort that is present in the image.   Normally, I tend to favor photographing a guy in a variety of underwear that highlights his physique, but there is something appealing about seeing a guy in pair of boxers.  While the gallery has some additional images of Sergio posing in a variety of briefs, I ended up selecting this image because it simply called to me.

In addition to liking the soft looking boxers, I also liked how his black pants are pooling around his knees and calves.  For me, that effect helps to create the feeling that I have captured a moment in time.  In the past, it has not been a typical image that I have tried to captured; I've been more focused on having "clean" images that move from pose/garment to pose/garment - not the in-between phases.  However, I'm finding myself looking forward to capturing these types of images, as well as the "behind the scenes" types, that help to present a more comprehensive view of the photo shoot.

Given that, I also like how the lighting works to show off the definition in his body.  In particular, I like how the light highlights the muscle definition in his chest, abs, and hips as well as the muscles over his ribs on the left side of his body.  Sergio definitely worked hard to achieve his muscle tone; I'm just happy that I was able to capture it in a positive light. 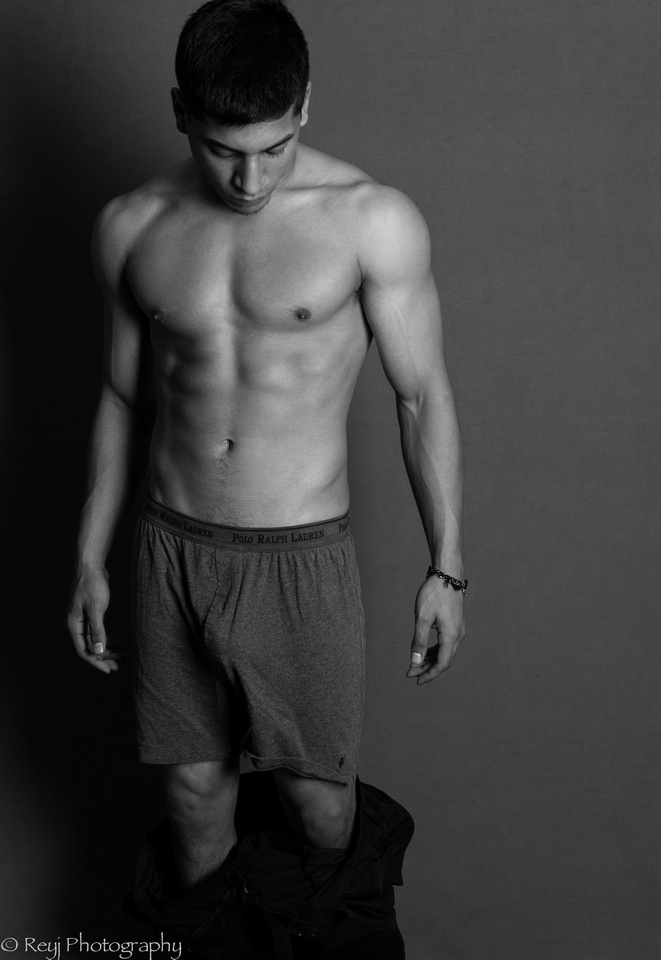 For me, there were several images that I could have chosen as my overall favorite from the shoot.  However, I ended up choosing the image below because of how several elements came together.  As I mentioned before, I definitely liked how comfortable Sergio looked in his soft looking, gray boxers and how that feeling transferred in the image below.  And I definitely love how the lighting sweeps across his body, particularly on his face.

However, I ended up choosing the image below as my favorite because of the pose.  While I could have played with the composition and had him be more off centered to create a different feel to the image, I ended up liking how the image felt with the chair placed directly centered.  But instead of him being seated in the middle of the chair and staring directly at the camera, I wanted to create some interested by having him seated off-centered and turned slightly to create some counter balance to the weight of his left leg thrown over the side of the chair.  To me, it helped to make the image more interesting while still having him in the center of the image.

In addition to the placement of his body, I love his hands in the image.  As I mentioned before, I tend to pay attention to hands because I don't want them to come off like they are just hanging there.  Sure, I don't always have the model doing something with their hands in every single image, but I do try and have them change it up to help make them interesting.  For me, I love how they look as they are somewhat clasped together. Additionally, I like how they help to add some perspective to the image.  Yeah, the hand placement definitely factored in when I was choosing my favorite image from the shoot. 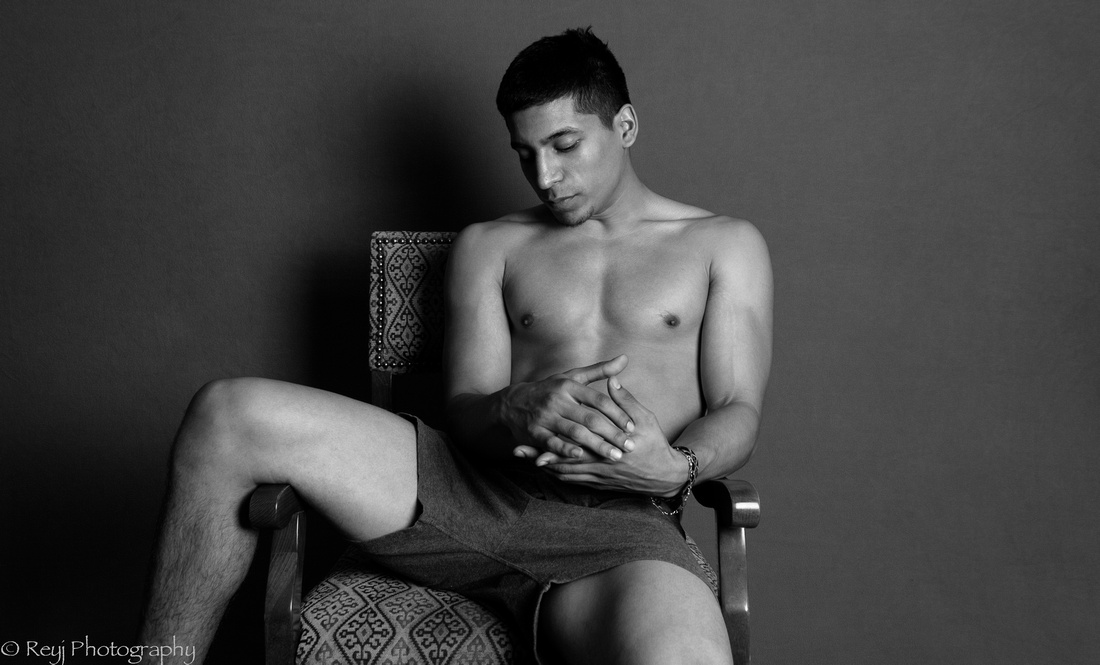 I absolutely loved working with Sergio during this photo shoot!  I'm definitely happy with the images that came out from our collaboration and several of them have become my favorites from my catalog overall.  Sergio was definitely a pleasure to work with throughout the shoot, especially with how focused he was on helping to create stunning images.  I'm definitely already thinking about heading back to San Antonio in order to work with him on another photo shoot.  I'm definitely hoping that it works out!  If you are interested, you can check out the gallery dedicated to the photo shoot at http://www.reyjphotography.com/sergio.

Again, thanks for checking out the website and blog!  I definitely appreciate it that you guys are taking the time to scope out my work!

If you want, you can also checking out my Instagram at http://www.instagram.com/reyj.photography.  I tend to post images daily there!

If you are interested in setting up a shoot or letting me know what you think about my work, you can email me at [email protected]!