Well, I figured that it was time for another blog entry.  Of course, I'm twitching in pain at the moment....I hate back pain.  It started on last Wednesday afternoon and is still continuing.  It's not as bad on Thursday and Friday, but it's still annoying as hell.  Hopefully, it will get better by Wednesday since I have to travel to San Antonio for a work-related conference.  Still, I'm definitely feeling some twinges as I sit hear writing this entry.

So, for the next photo shoot that I participated in with the meet-up group, I was able to work with Dave Brett again.  Like the first shoot with him, Dave proved to be an awesome model as we went throughout the various photography ideas for the shoot.  The overall theme of the shoot was the "Warrior Spirit."  It definitely allowed me to to work through various interpretations of the theme from barbaric, to Roman, to Neoclassical reinterpretations, and finally to a modern take on warriors.  Looking back on the shoot, it definitely was one of the best photo shoots that I participated in since I was able to present my ideas and make them a reality.

As a photographer, I sometimes find myself  stepping  back  from the action and get an intense  feeling that  something  special, maybe even  awesome, is occurring  before my  eyes.  During this group shoot, I sat down for a bit  and was reviewing the image that would  eventually  become  "Warrior Stare" (the image below).  I was playing  with  the limited cropping  ability in camera and stunned myself with the capture.  Once the shoot  was done, I found myself racing home to work  specifically on that image.  Once I was done editing  it, I  took a step back and still felt  the intense feeling  from the warrior's yell.  Like I  said, I often find  myself stopping at the image and staring for a few  minutes as I'm  taken back  to that moment.  While some folks have  commented on the image, it doesn't  gather the attention that  some of the full-on nudes do on my Model Mayhem page.  It doesn't matter  though; I'm happy with  the  way the image came out and do my  part to  show it off  to others. 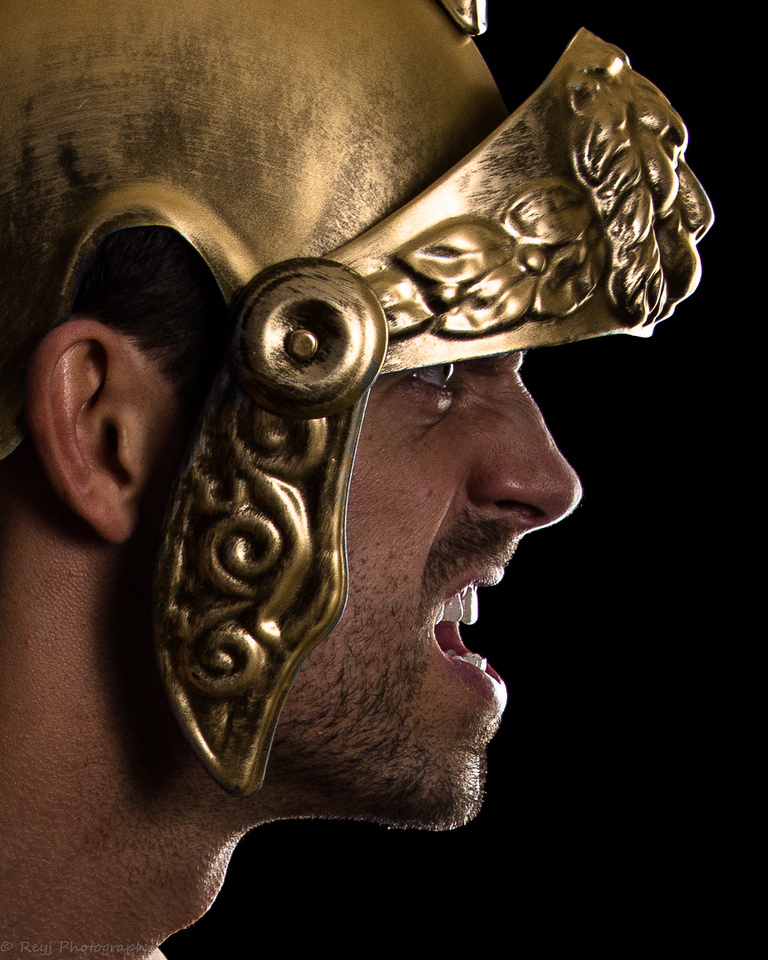 The theme of the shoot was photographing the "Warrior Spirit."   "Warrior Stare" is definitely one of my favorite images from the shoot to the point of actually rushing home and working on that image right away.  However, there are several other images from the shoot that rank pretty highly in terms of being on my list of favorite images.  The image below is definitely one of those images.  I loved the using the shield and spear as props throughout the shoot; it definitely added to the overall "Warrior Spirit" theme, especially with the costume.  However, for me, the image is is really made with Dave's rugged, masculine looks as well as the intensity of his expression.  These aspects, including the pose and lighting, came together beautifully to create an awesome image in my opinion. 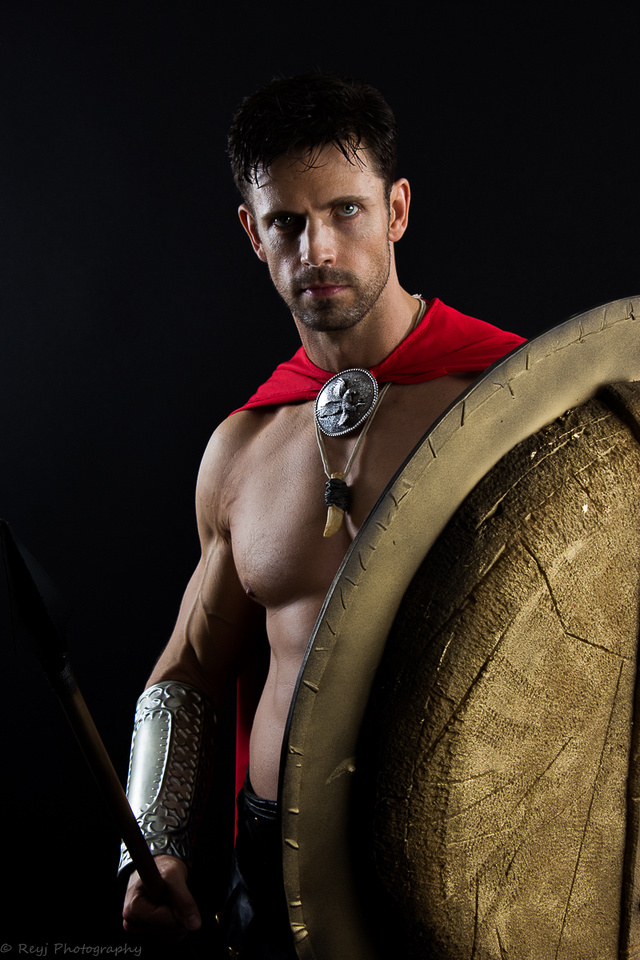 In addition to the image above, I was able to also capture an amazing image below.  I definitely love the fact that it focuses on his torso with just a hint of his chin and the helmet.  The lighting definitely helps to emphasis his physique as well as the costume.  Like I said, it's definitely one of my favorite images from the shoot. 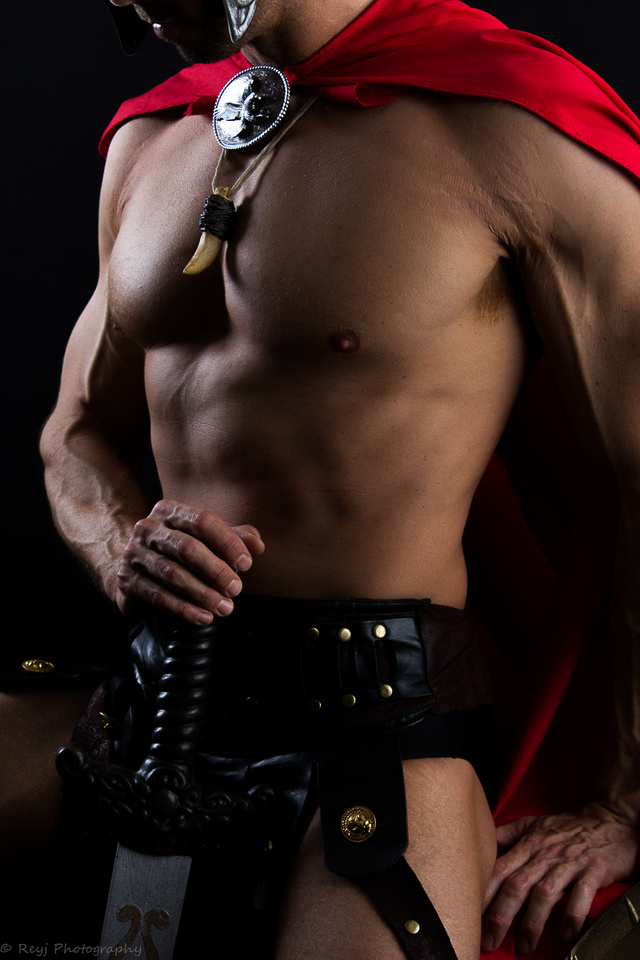 Still going with the full "Warrior Spirit" theme, I decided that I needed to get an image of Dave completely nude with just the spear and shield.  From that portion of the series, the image below is definitely one of my favorites.  As usual, I loved the pose depicted in the image and the intensity of the stare as he looks off into the distance.  Furthermore, I love the fact that shield actually "shields" his nudity, but there's still a hint of it. 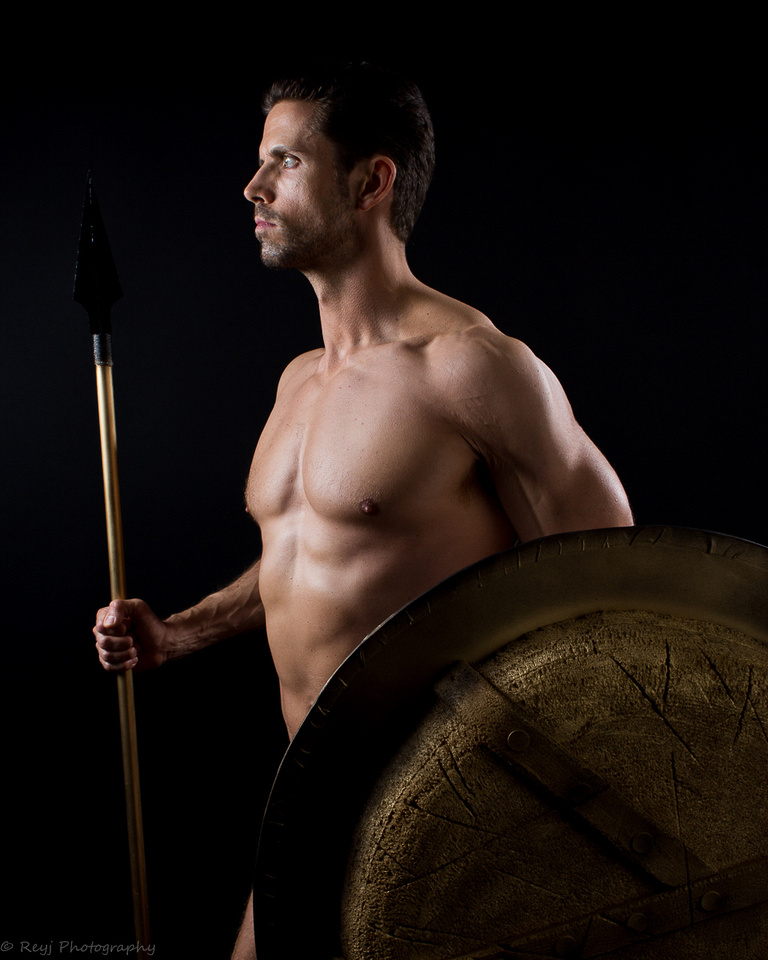 Dave has a Model Mayhem page (http://www.modelmayhem.com/1332923).  If you are ever looking to working with professional model, definitely think about working with Dave.  He's simply amazing.