As I work with male models, I really shouldn't be surprised by the brief encounters and touches to other worlds.  Nonetheless, it amazes me everything that I see a model pop up unexpectedly in other industries.  That was the case with Levi Michaels.  Still, it's kind of cool knowing that I worked with him before he became better known, even if it was only for a few hours.

As you can guess, I was still occasionally participating in some of the meet-up group photo shoots, including this one that occurred in May 2012.  The theme of the photo shoot focused on Fairy Tales, including Alice in Wonderland, Little Red Riding Hood and the Big Bad Wolf, and Jack and the Beanstock.  Yeah, I definitely thought that it sounded interesting and I definitely wanted to participate in the shoot.  However, the reality of it didn't exactly live up to the expectations.  It wasn't for the lack of props or the models, but I couldn't really connect to the theme and seemed to be going through the motions.  I think the shoot would have been better if I had an end game in sight, but sadly that was not the case.

However, there were a couple of images that I thought came out well.  During the Jack and the Beanstock portion of the shoot, I was able to capture the image below of Levi.  I definitely love the distant stare and how the green stands out against his skin and hair.  Of course, this is one of those images that I want to go back and work on since I've learned how to work in PhotoShop.  I can see myself taking out the black background and replacing it with a blue sky with clouds.  Additionally, I might try to make the "beanstock" a little more realistic looking.  But overall, I'm happy with the way that the image turned out because of Levi's stare off into the distance.  For me, that makes the image interesting - the intense stare and the somewhat defiant tilt of his head. 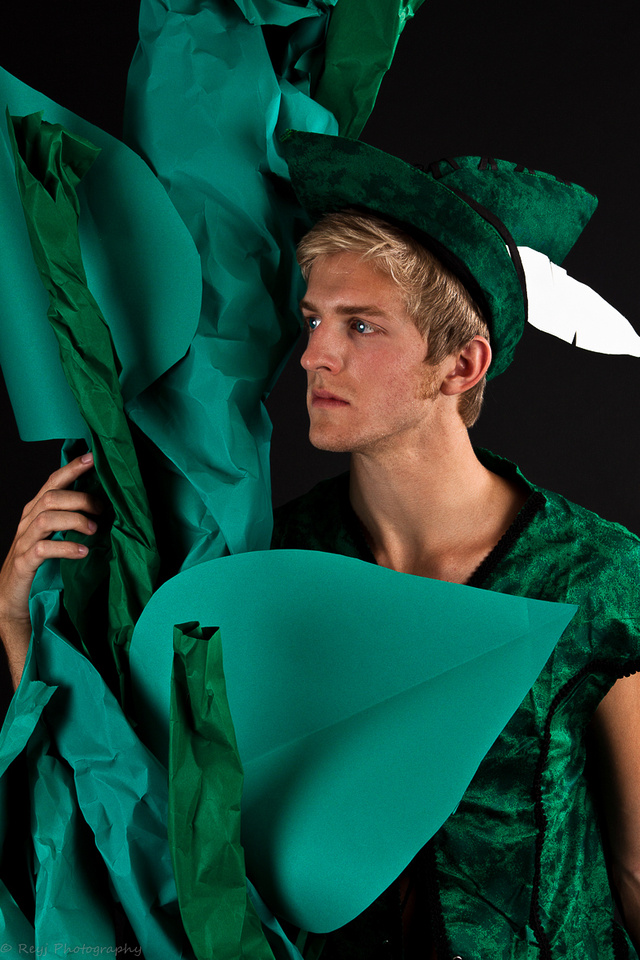 Of course, I was definitely more interested in moving away from the theme and taking some "behind the scene" images as props were taken down and replaced with others.  The image below is definitely one of those images.  As the others were working with Adam, the second model, I took one of the lights and shined it at Levi while he was reclining on the bed.  I definitely want to say that the image below was one of the first that I took of a model posing in a bedroom-like setting.  Yeah, as I'm writing up this blog entry, I'm totally realizing that we should have done Sleeping Beauty given the ornateness of the bed.  Oh well....hindsight.

Anyway, there are several reasons why I love the image below.  First off, I love the split lighting used to light Levi's body.  As you can tell, the light is coming from just behind his shoulder and gently wraps around his face.  I also love the subtle catch lights in his eyes.  In addition to the lighting, I love the fact that I was able to capture some good depth of field and exactly where I wanted it.  As you can see, I was crouched at the foot of the bed.  However, I didn't want to have a lot of detail in the foreground or the background.  Using a smaller aperture, I was able to just get his face in focus with some clarity while the rest of the image is softer and not in focus.

In addition to those elements, I also like the simple pose.  It's definitely a carefree pose that I've seen countless times as I was growing up and have done myself.  Okay, I haven't done the same pose while completely nude.  It's definitely a carefree type of pose.  Of course, I loved the fact that his feet are rubbing against each other and the slope of his arch leads the viewer's eye to his and down to the rest of his body.  Overall, I love the image and have to say that it's my favorite image from the series. 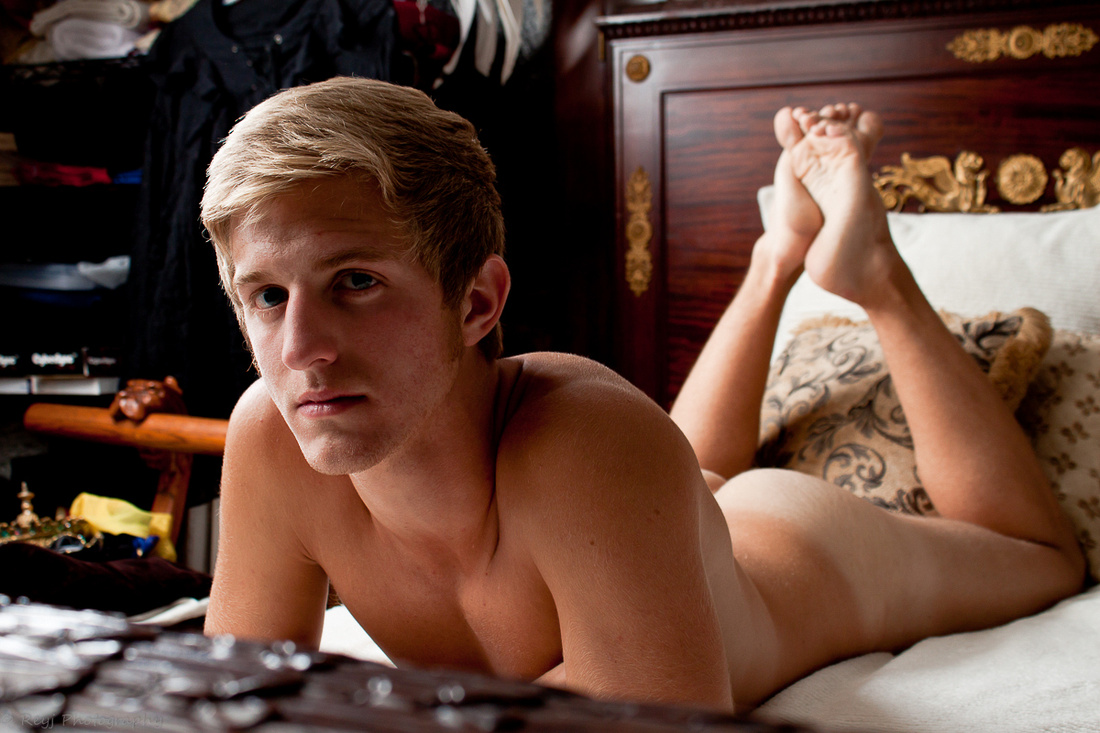 During the shoot, I also had the privilege to work with Adam, also known as TexanGuy on his Model Mayhem page.  I have to say that I was a little more enraptured with his quite personality than Levi's.  Nothing against Levi, but I tend to find myself drawn to the quieter, somewhat shy guys.  Adam definitely fit that bill during the shoot.  However, he definitely exuded a quiet confidence that drew me as much as Levi's blue eyes.

I definitely love the image below.  Levi has that defiant, bordering on arrogant, look, which translates well into a princely behavior.  The contrast between the fact that Levi's body is shielded by the maroon cloak while Adam's body is exposed is the primarily reason why I love the image.  The definition in Adam's body is definitely amazing, especially in the lines around his hips and the highlighted muscles in in his upper thighs.  It's definitely a somewhat simple image, but it's one of that I like overall. 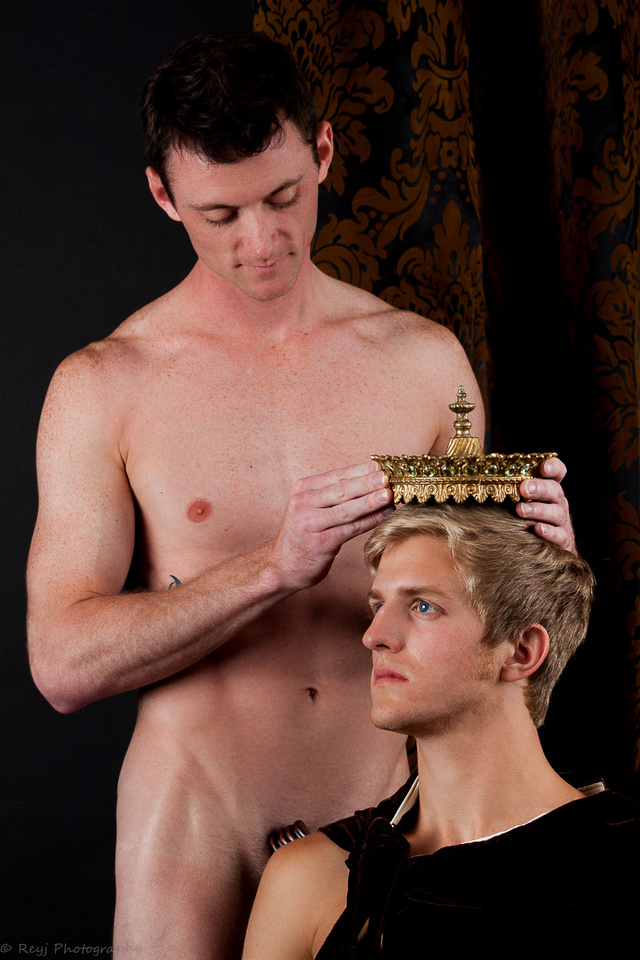 This photo shoot was the first one when I was working with two models at the same time.  It was a little weird for me in the sense that I tend to like focusing on just one model during a shoot and trying to establish a connection with them throughout the shoot.  I did find myself working harder to get a connection with both of them, but then I realized that I just needed them to have a connection with each other, and potentially some chemistry.  The last three images in this entry shows my attempt at capturing some of the connection and playfulness between Levi and Adam.  In the first image, I love the fact that Adam is focused on Levi instead of looking at the camera.  I love the fact that Adam seems more relaxed in the image and seems to be more comfortable with the intimacy. 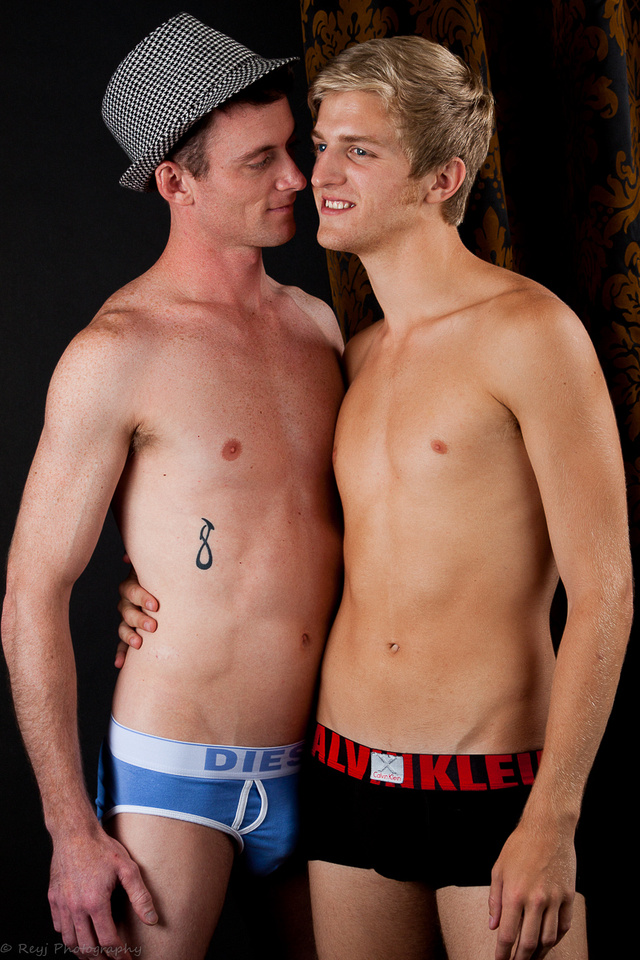 The second image definitely feels more like a couple's image.  However, I'm still drawn to the fact that Adam is more relaxed than Levi.  Furthermore, I'm drawn to Adam's smile and eyes.  Like I said, I think that I developed more of a rapport with Adam than Levi, which led me to capture Adam's finer qualities a little easier.  Nonetheless, I love the image and how it turned out overall. 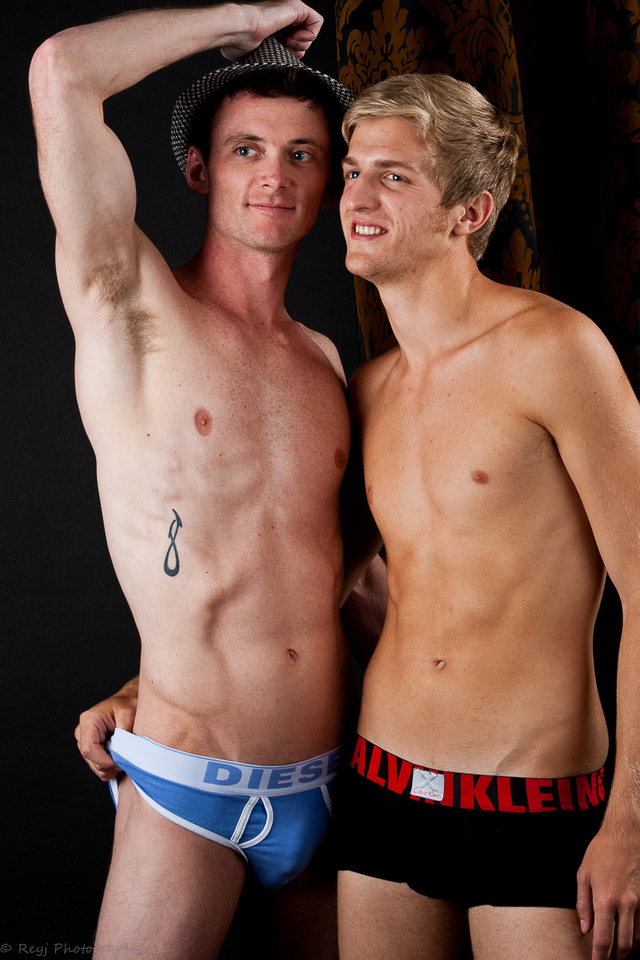 In the final image below, I think I was able to capture some of the chemistry between Adam and Levi.  I definitely love this image of Levi more than the other two because it doesn't feel as strained.  I definitely loved the fact that they are focused on each other more than the camera and seem to be sharing a moment between themselves.  And that's one of the reasons why I love photography.  I love being able to capture those fleeting moments and sharing them.

I'm definitely proud of this image since it conveys an overall feeling of sensuality.  To me, it's demonstrated in the twists of their heads and the placement of Adam's hands on Levi's body.  Yes, there is a feeling of eroticism with Adam's fingers dipping into the waistband of Levi's Calvins, but it's drowned out by the sheer look on their faces.  For a moment there, I really thought that they were going to kiss, but alas that did not happen.  However, the image definitely gives the impression that a kiss between lovers was inevitable.  Like I said, I'm proud of this image for what it shows and making the viewer wonder what will happen next.  Of course, it's my image and I could be reading into it; but if it makes me, the photographer, wonder, then I'm assuming that it's raising similar questions in other viewers.  And to me, that is awesome. 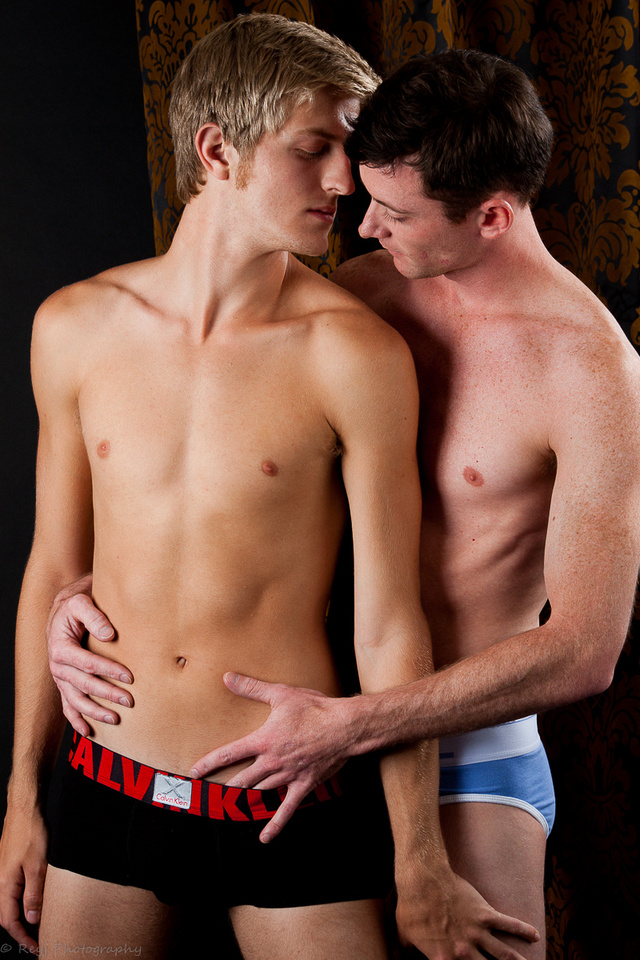 There is a part of me that wants to photograph some additional couples, but I'm not sure if that's my style.  Like I said, this photo shoot was my first one photographing more than one model at a time.  Furthermore, it was my first photo shoot photographing two gay guys that could act like there was chemistry between them - maybe there was.  However, this has been my own photo shoot that involved more than one model as well as have a sensuality component to it.  I am, however, open to the thought of photographing couples in something similar, but I think I'm going to have to become more comfortable in capturing those moments.  Nonetheless, I am proud of the images that I was able to capture with Adam and Levi.

I would definitely recommend working with Adam.  He has a quiet personality that definitely made it easy to work with during the shoot.  His Model Mayhem page can be found at http://www.modelmayhem.com/2596088.

Levi Michaels was definitely fun to work with throughout the shoot.  Sadly, he's now living in New York City.  However, if you have the opportunity to work with him, I would definitely recommend it.  His Model Mayhem page can be found at http://www.modelmayhem.com/2474816.