Hey guys!  It's been a while since I last posted an entry, but I've been busy conducting some photo shoots this month as well as trying to get somewhat settled in the new place.  Yeah, I know that I moved into the new place back in the middle of September, but I'm horrible about moving out and unpacking my stuff.  Hell, I still quite a bit of my stuff packed in boxes and stashed in corners throughout my apartment.  Yeah, I didn't finished my stuff from the old place until the first weekend of October.  Horrible I know.  It definitely makes me want to stay in this apartment forever...well, at least until I finish my graduate degree and figure out the next step in my journey.

However, one of the first things that I actually ended up doing was getting my photography equipment moved from the old place into the new place and designating an area of my place for photo shoots.  So far, it's worked out great.  Since moving into the new place, I've held five photo shoots and have one more scheduled for next weekend.  I've definitely been amazed with the images that I've created with several of those models.  I'm hoping to actually get them edited in Lightroom and manipulated in PhotoShop.  I really can't wait to share them with you guys.  Hopefully, you'll like them as much as I do.

Anyway, as you have already guessed, this entry is going to focus on the photo shoot with Porter Wescott.  As you probably guessed, I did this photo shoot while working with the photography meet-up group here in Austin.  Let me start off by saying that, at the time of the photo shoot, I was unaware that I would be working with him.  Sure, I had seen his name and picture when I decided to participate in the shoot.  So yeah, I was definitely lucky and probably would have been more nervous if I had made the connection before the photo shoot.  Nevertheless, Porter was awesome to work with throughout the shoot.  He was down-to-earth and completely charmed me with his personality.  Sure, he's good looking and has a nice body, but I definitely was won over by his easy-going attitude and easy laugh.  Not going to lie...I may have fallen a little in love with him throughout the shoot, but it's a good thing since it gave me a better connection with him and helped me to capture his appealing qualities more easily.

So the photo shoot occurred in March 2012 and was my fifth photo shoot overall.  Of course, the meet-up group organizer had a theme for the shoot, which focused on the locker room and its eroticism.  It was definitely easy to draw inspiration for the shoot even after all of these years past my freshman gym class.  As such, the shoot included props like a baseball bat and helmet, jockstraps, some soccer netting, and a change of setting to do some shower shoots.  Yeah, this was my first time shooting a model in a shower setting!  Yeah, it was definitely interesting and exciting to be doing something different from your typical white seamless paper set-up!  I've definitely tried to incorporate some shower images in my shoots, but I think the ones with Porter are definitely my favorite ones.  More about that later.

Porter definitely is gorgeous.  For me, I absolutely loved his scruff look.  He definitely is good looking when he's clean shaven, but his scruffy look makes him look more of a bad boy that is always up for mischief.  Of course, his body is amazing and looks great in the image below.  As I mentioned earlier, the baseball player themed was used throughout the shoot.  As such, I was able to capture this image of Porter sporting a Papi jockstrap and holding the baseball bat.  For me, the lighting and the pose definitely make the image.  I'm definitely a fan of split lighting and the way the light tapers off as it wraps around his body.

However, it's the pose that I absolutely love.  I love profile shots because they show off the model's body better.  I love being able to capture the curve of the model's back into his trim waist before it slopes back out over his ass and down into his legs.  Porter definitely doesn't disappoint in that area and definitely did the pose justice in my mind.  It's further emphasized by the diagonals of the jockstrap with waistband and leg strap framing his ass perfectly and also helping to guide the viewer's eye to his hand and the bat.  The amazing this is that it's a simple pose and overall shot, but looks amazing.  This image is one of my favorite images in my catalog and definitely one of my favorites from the shoot. 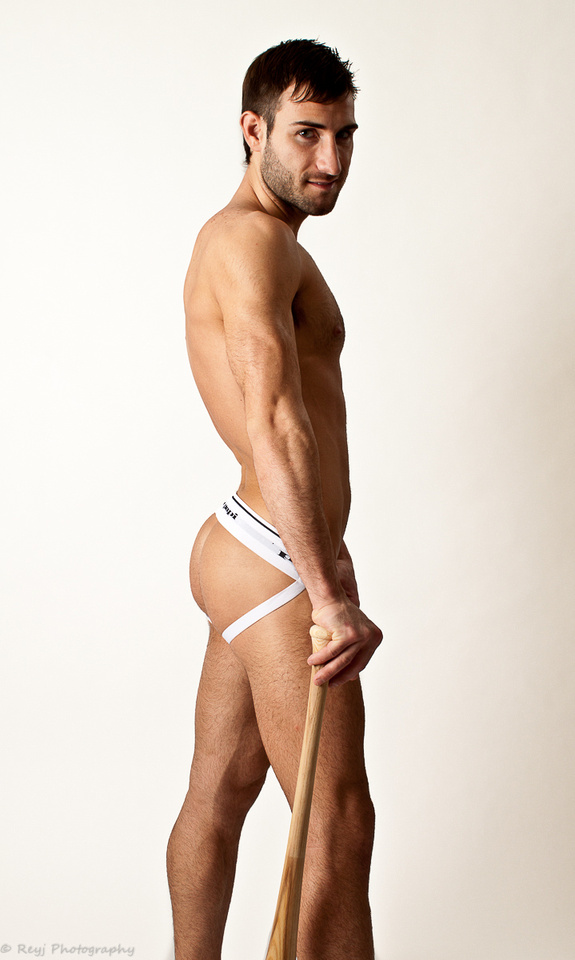 For me, posing and lighting definitely go a great way in creating an amazing image.  It definitely helps that Porter is good-looking, but I tend to focus on the overall image.  Between 1835 and 1836, Hippolyte Flandrin painted the Study (Young Male Nude Seated besides the Sea) (http://en.wikipedia.org/wiki/Study_%28Flandrin%29).  As the name implies, it's a young nude male sitting besides the sea with his knees drawn up to his chest, his arms wrapped around them, and his head leaning against his knees.  To me, this image is iconic and the pose burned into my mind ever since I first saw the image in an art history textbook.  It is definitely one of my dreams to eventually get to Paris and see the actual painting hanging the Louvre.

As such, I definitely took the opportunity to recreate the pose with Porter.  Yeah, I don't have a sea as the backdrop, but I want to say that the image came out well.  It doesn't mimic the painting completely, but I love the fact that Porter's actually looking at the camera and has the hints of a knowing smile.  It definitely helps to connect the viewer to image the image a little better than if I had truly mimicked the painting.  Overall, I love the image and it ranks highly in my catalog of images. 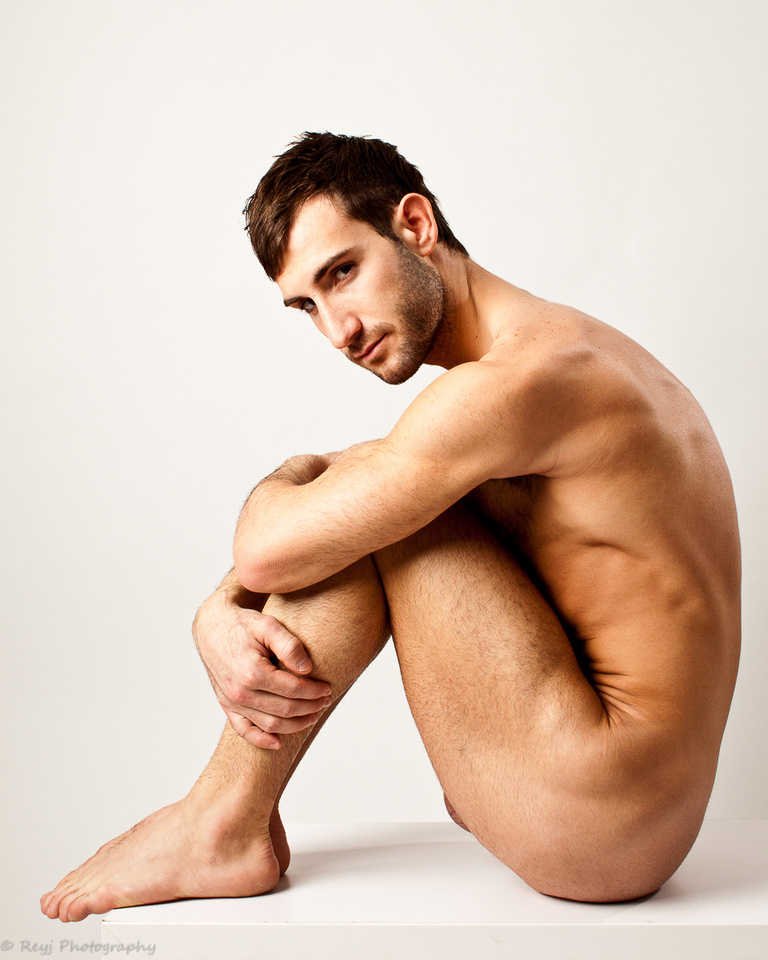 As I probably mentioned before, I am definitely a fan of black and white images with a pop of color.  A while back, I came across these set of images of Carlos Villar that was done by David Wagner, a photographer based in Los Angeles.  Wagner LA (http://www.modelmayhem.com/1693912) is definitely an amazing photographer and has created some truly amazing work in fashion as well as his work with male models.  But there was a image from the shoot with Carlos Villar that captured my interested and buried itself deeply in my thoughts.  The series with Carlos Villar focuses on him posing as a boxer and wearing athletic clothing throughout the shoot (http://www.beautifulmag.com/beautiful/2010/12/thats-what-friends-are-for.html).  However, it's that first image that caught my attention and wouldn't leave my mind until I was able to recreate it somehow.

Of course, the opportunity came with Porter.  It's not the exact same pose as the one that Wagner photographer, but it's definitely my homage to his work.  Porter definitely did an amazing job with the pose and I love the way that it shows off his abs.  I definitely love the tension ins both of his arms with the muscles outlined nicely in his left arm and the veins standing out in his right one.  However, as much as I love the pose and the handling of the black and white tones, I keep coming back to the yellow jockstrap.  Of course, the jockstrap that he was posing in wasn't that bright yellow, but to keep with the homage to Wagner, I painting it yellow in Lightroom.  Like I said, I'm a sucker for black and white images with pops of color and have done quite a few since the shoot with Porter.    However, I don't think that I'm done with the pose yet.  That pose will probably make another appearance in a future shoot now that I've written about it.  Overall, I love the image and think that it came out great. 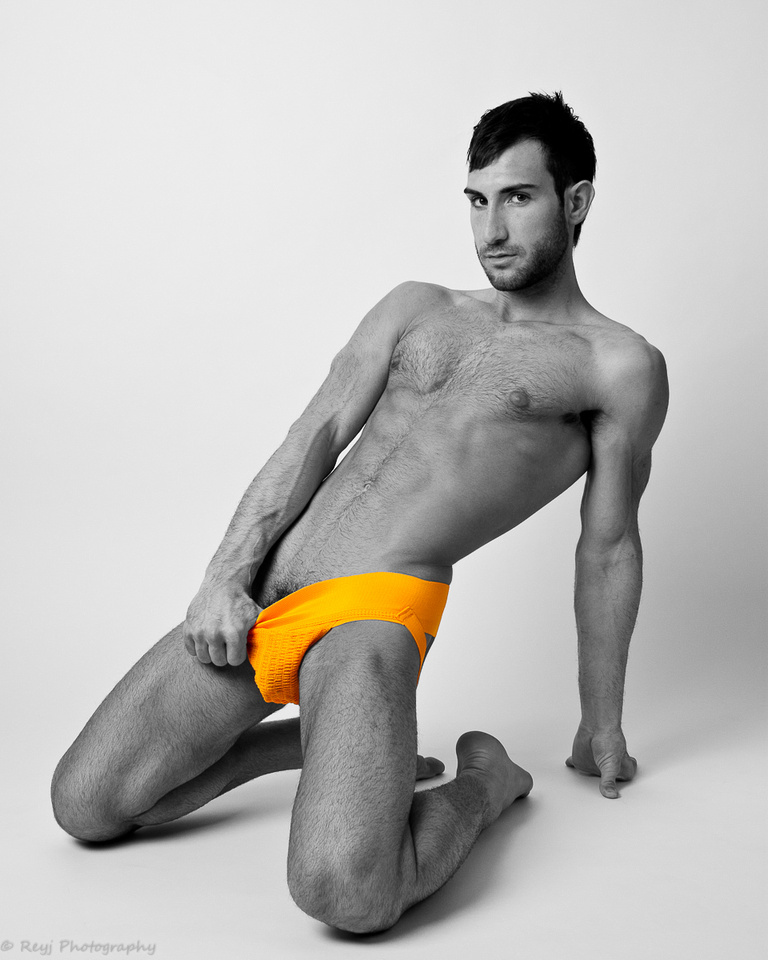 Several of the photographers in the meet-up loved photographing models playing with various pieces of fabric.  Of course, I've seen some amazing images with fabric in the past, but it never struck me as something that I needed to do.  However, working with the other photographers have led me to incorporating fabric into shoots when I can.  Of course, it means that I need to invest in some interesting fabric if I'm going to use them in future shoots.

Of course, I definitely took the opportunity to photograph Porter swirling some metallic fabric around his body.  Of course, I love the pose in the image.  It definitely shows Porter's body extremely well, especially the curves of his ass as the slope from his lean waist.  On top of that, I love the turn of his shoulders to show his left pec as well as the muscles in his upper back and how it's mimicked in his the angle of his head.  Like I said, it's an amazing pose that highlights his body extremely well.

As amazing as his body is in the image, to me, it's the fabric that creates the image.  For instance, I love the fact that I was able to change the color of the fabric without screwing up the golden tones of his body.  Yeah, the fabric started off as metallic blue.  So yeah, I'm definitely happy that I was able to transfer the color within Lightroom from metallic blue to metallic purple.  To me, it just has a better contrast against his body in terms of color.  In addition to the color, I love the way that the light bounces off of the metallic fabric and creates some awesome looking highlights and shadows.  Furthermore, I also am amazed on portions of the fabric seems like liquid, especially on the upper portions of the fabric.  Overall, the fabric added another dimension as it flowed around his body and acted as a foil to his skin.  It definitely added an element that made me fall in love with the image.

Overall, I am happy with the images that I captured during the photo shoot with Porter and enhanced through various editing techniques.  I definitely was able to push my skills a little further and learn some new tricks throughout the entire process.  Of course, it's always a pleasure to work with good looking models, but Porter was simply amazing to work with.  Like I said, I definitely feel a little in love with him throughout the shoot, especially during the shower shots.  Furthermore, I was able to create some amazing images that I am proud to call my own and have gained some attention through various blogs and websites, including visitors to my own Model Mayhem page.  Like I said, this photo shoot definitely gave me enough confidence to believe that I am a good photographer and have something interesting, and maybe amazing, to show the world.

Porter does have a Model Mayhem page if you're interested in working with him: http://www.modelmayhem.com/1842555.  Check out his work there!