Well, I decided that it was time to post another entry today regarding one of my previous photo shoots.  Back in February 2012, I had the opportunity to attend another meet-up group photo shoot.  The theme for this photo shoot was Hell, which I thought was hilarious since the model, Jerry, had the Star of David tattoo on his side.  For some reason or another, the organizer thought that the tattoo was a pentagram and told Jerry that.  It ended up cracking the both of us up to no end.  The theme actually got dropped pretty quickly, which actually worked out in my favor since I didn't really know what I was going to do during the shoot - other than getting a couple of red gels on the lights and try to simulate hell's fire.  Either way, the shoot definitely evolved pass the hell theme and just became a regular shoot.

I definitely have to say that Jerry was a great model.  He definitely had an air of masculinity to him and seemed to ooze aggression throughout the shoot.  Sure, I was a little taken aback by his straightforwardness and overall attitude, but it definitely worked when he posed confidently throughout the shoot.  Some guys are just completely comfortable in their skin and Jerry definitely knew that he was sexy and desirable to both sexes.  Of course, it definitely helped that he had an awesome body and wasn't afraid to show it off for the camera.

The image below was definitely one of my favorite from the shoot.  I love the pose with his arms framing his face and his weight placed on one leg.  I absolutely love the position of his hips and the curve that his thigh, hip, torso, and arm make.  But more importantly, I love the lighting in the image.  Sure, his left arm is blocking the light coming from the right, but I love the way that it drapes across his body as it goes through the various gradients across his body.  Additionally, I love the catch lights in his eyes and how it attracts the viewer's attention from the very beginning.  Overall, I favor the image because of the masculinity that is on display and the confidence that the pose exudes.  It's definitely one of my favorite images from the shoot. 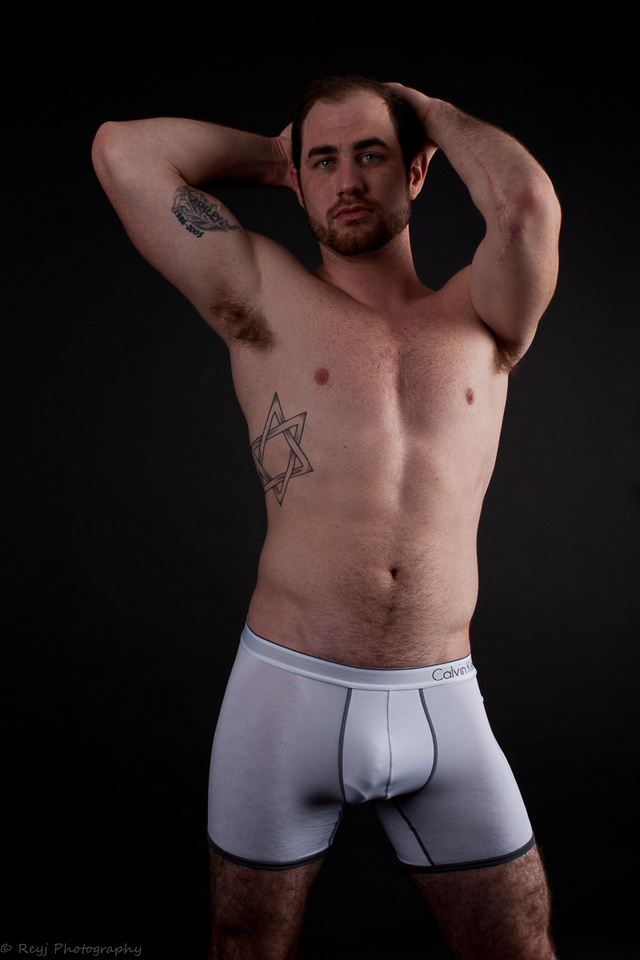 Of course, as you guys have pretty guess, I am partial to black and white images.  Moreover, I love black and white images with a pop of color.  When I first took this image, I didn't really know how I was going to make this work since I hadn't gotten into using PhotoShop and was limited to Lightroom for my classes.  However, where there's a will; there's a way.  So after talking with my professor and looking at some tutorials online, I decided that the best way for me to do this in Lightroom was to carefully desaturate his body and hope that I wouldn't get into the areas that I wanted to pop with color.  So yeah, it didn't take too long once I finished editing the color version of the image and then working on increasing the pop in the metallic fabric.

Like I said, I absolutely love the contrast between the gray tones of his body and the metallic gleam of the fabric.  It's further helped by the long-nosed mask.  To me, it definitely is one of my more artistic images in terms of composition and handling.  Of course, it's one of my absolute favorite images in my overall collection.  I even went as far as refining and printing the image on large scale paper in order to have the print hanging on my wall.  At least, it's printed.  I'm still working on getting it hung in the new place, but it will be happening soon. 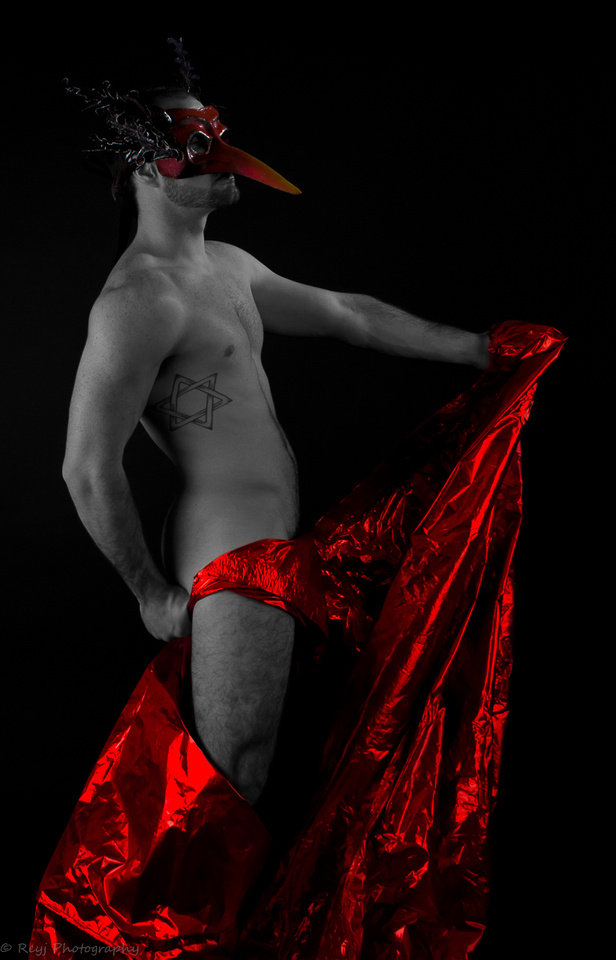 I'm definitely glad that I was able to participate in this photo shoot and have the opportunity to work with Jerry.  The amazing thing was that this was Jerry's first shoot.  He walked in like he owned the place and definitely gave an amazing performance throughout the entire shoot.  Sure, his attitude and air of aggression was a little intimidating at first, but I definitely move beyond that as the shoot progressed and was able to get several amazing images from the shoot.  As I said throughout the entry, three of the images from this photo shoot have become my favorites from my entire catalog.