Another quick post because I still don't want to go read for grad school.

So, I was scheduled to have two photo shoots today, but they both fell through for various reasons.  That's definitely the nature of the game, but I had gone through the effort of setting up the backdrop (seamless black paper) and the lighting equipment.  Well, it's almost fortunately that they both fell through since I was rushing through things and was not really prepared for the shoots.  At least both of them asked to be rescheduled with one for Tuesday, September 30th, and the other for mid October.

However, I had the backdrop and lighting equipment set-up.  So, I decided to play around with some quick self-portraits and light editing to finish them up.  The details on my eyes was fun to do, even though it feel weird to do some editing on my own portraits.  Yeah, I was trying to decide if I wanted to remove any freckles or other blemishes that my eyes starting zeroing in.  It definitely is a weird feeling to say the least.  Either way, I decided to do very basic editing on the two images - mostly to removing some blemishes.

I do have to say that I ended up liking the image below.  That image was a complete accident since I was just firing my camera to make sure that the wireless trigger for the lights were actually working.  Found out that it was, but one of my lights was not working.  Probably because I blew it out last December.  So yeah, I figure that the smoke coming from the back of the light probably means that it's dead.  I've already got an order in to replace that light, which is definitely good.  I'm not sure when I'll get it, but I'll make do with one light for the shoots that I've got scheduled during the first couple of weeks in October.

But during that testing, I got a pretty interesting self portrait.  So, I'm a sucker for black and white images and dramatic lighting.  This sort of has both of them going on in there.  It's definitely got some interesting lighting going on.  I absolutely love the fact that I've got some light on my left eye and cheek (on the right side below) while the rest of it is in shadow.  I love the expression on my face - I can't tell if I'm seriously thinking abut something (which I know I wasn't) or if I was staring intently at something (which I wasn't).  It's definitely one of my better self-portraits that occurred by a happy accident. 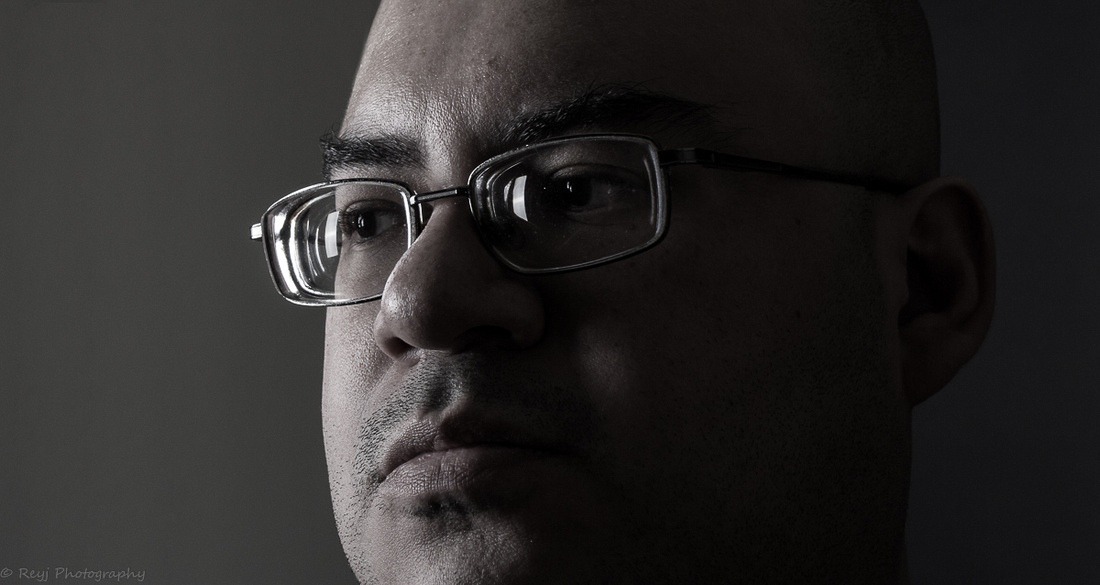