Once again, I am putting off doing any work for my graduate courses.  Don't get me wrong, I actually like both of the courses that I'm taking this semester, but I would rather be working on something related to photography.  So for now, that's going to be writing a blog entry about another one of my past photography sessions.

As I mentioned before, I was working with a photography meet-up group here in Austin to get some practice working with male models and becoming more comfortable in a studio set-up.  By the time that February rolled around, I had already done two photo shoots.  Both of them were pretty cool and the models were awesome to work with.  So it made sense for me to continue participating in the meet-up group activities, including the first shoot in February.

I think I tend to like the simple images the best.  The image below definitely shows off one of Toner91's assets.  Yeah, I had to make that joke.  Yeah, I'm a little on the corny side, but deal with it.  Anyway, I like the image for the simplicity of how Toner91 modeling an Andrew Christian jockstrap.  I definitely love the pose with the arm leading the viewer to Toner91's face.  But I also love the slight turn of his hips to show his narrow waist and leading down to his ass.  The framing done by his other arm helps to accentuate the view as well as mimicking the stance of his leg.  In addition to that, his direct confident gaze at the viewer adds another element to the image.  Like I said, there are times when everything lines up and creates an awesome image in my eye.  This one is definitely one of those images that I stop and look it when I'm scrolling through my catalog. 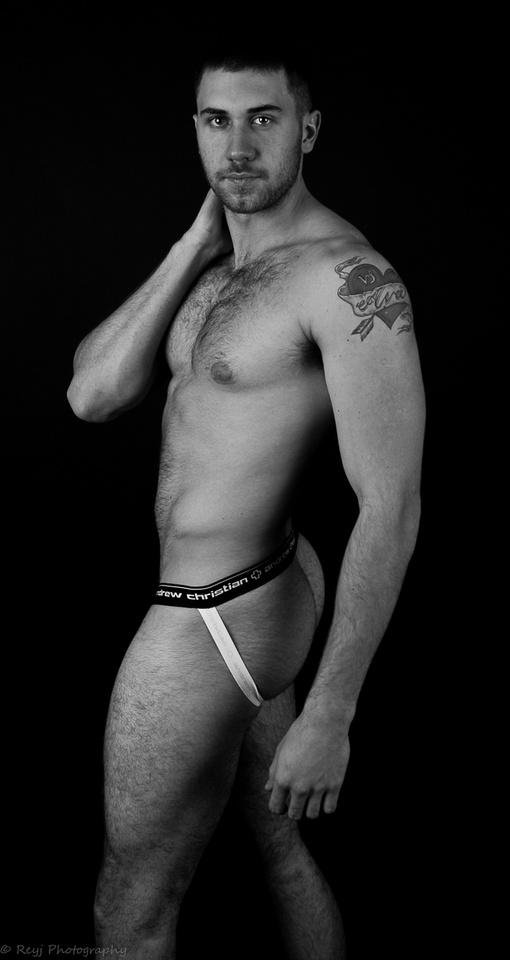 The photo shoot, Architecture and the Male Model, was definitely one of my favorite photo shoots with the meet-up group.  Then again, I found something interesting and unique from each photo shoot that I've participating in.  It definitely helps that Toner91 had an easy going personality and was fun to work with.  There were times during the shoot when he didn't know what pose to get into and would do a little jig will laughing.  It's little things like that that definitely made the photo shoot fun.

I'm definitely hoping to work with Toner91 again in the future.  Yes, he has an great body, but he's also got an amazing and personable attitude that definitely puts people at ease.  I would definitely recommend working with him if you get a chance.  His Model Mayhem page is at http://www.modelmayhem.com/2475263.