At the time, Joey was a local area model; he has since moved to the West Coast.  He was the last model that I photographed in October 2015, and allowed me to end the month on a high note!  It's not always that you cross paths with someone that can relate with your past.  It's not often that I cross paths with someone who grew up in Indiana and made the move to Texas.  So I was instantly delighted and felt kinship with Joey when I found out that he grew up there and went to the college on the campus that hosted my high school.  When I mentioned a place that I frequented during my junior and senior years of high school, he instantly knew where I was talking about and regaled me with stories of funny things that happened in those locations during his time on the campus.  It definitely made for that rapport to be easily built, but then again Joey did have a friendly personality that instantly had me talking and laughing like we were old friends.

As the shoot went on, he entertained me with stories about the horrible roommates that he had on campus and the crazy adventures he got up to.  Needless to say, he had me laughing throughout the entire shoot as well as sharing my own adventures during those two years of high school.  It's funny, because I was so focused on his storytelling that I wasn't aware of the time passing by so quickly.

I think that's why I like the image below so much.  To me, it captures the essence of his personality - from the easy, genuine smile to the twinkle in his eyes.  During my time with him, he was just a happy, easy-going guy that easily found an audience for his story telling.

But it also shows the his uniqueness.  It's not often that I come across anyone that proudly sports a facial tattoo, especially one that comes from comic books.  But to be honest, that facial tattoo was the primary reason that I wanted to work with him.  I know that a lot of photographers could be put off by it, but to me it made him a lot more interesting since I wanted to know what made him get the tattoo.  Plus, I wanted to photograph him because his look was completely unique to me - he's the only model to date that I have photographed who sported so many tattoos.  It was awe inspiring to have the opportunity to photograph such a unique model. 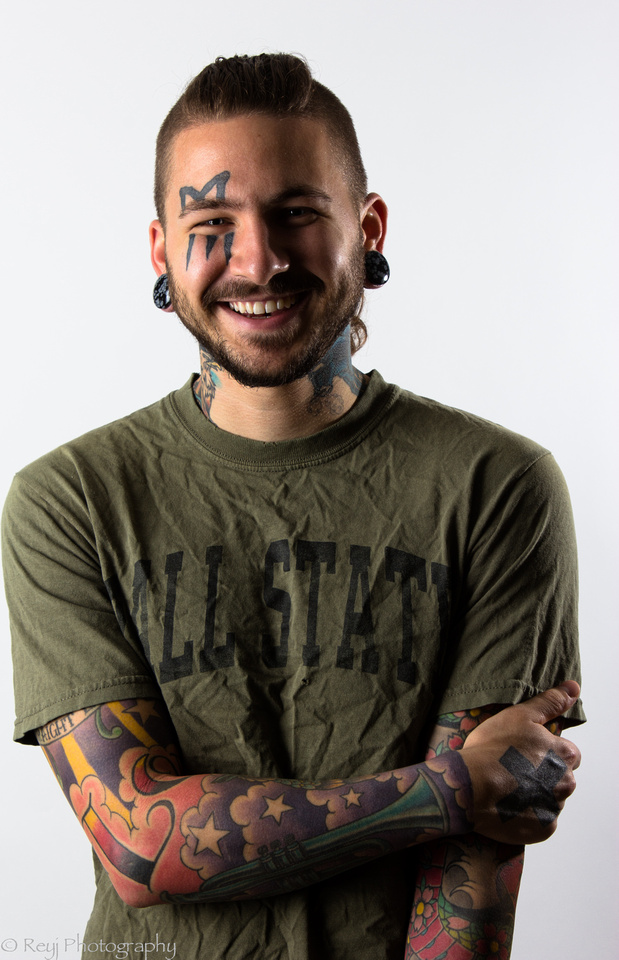 In addition to the three nudes, I also love how several of the portraits came out from the photo shoot.  The first one that I wanted to highlight is the one below.  While the majority of his face is cast in shadow created by his raised arms, I love how the light was able to highlight the left side of his face and even create a catchlight in his left eye.  While not your traditional portrait, I definitely think that it was an interesting and one of the first that ended up catching my attention during the editing process.  Nonetheless, it's definitely one of my favorite portraits from the photo shoot with Joey. 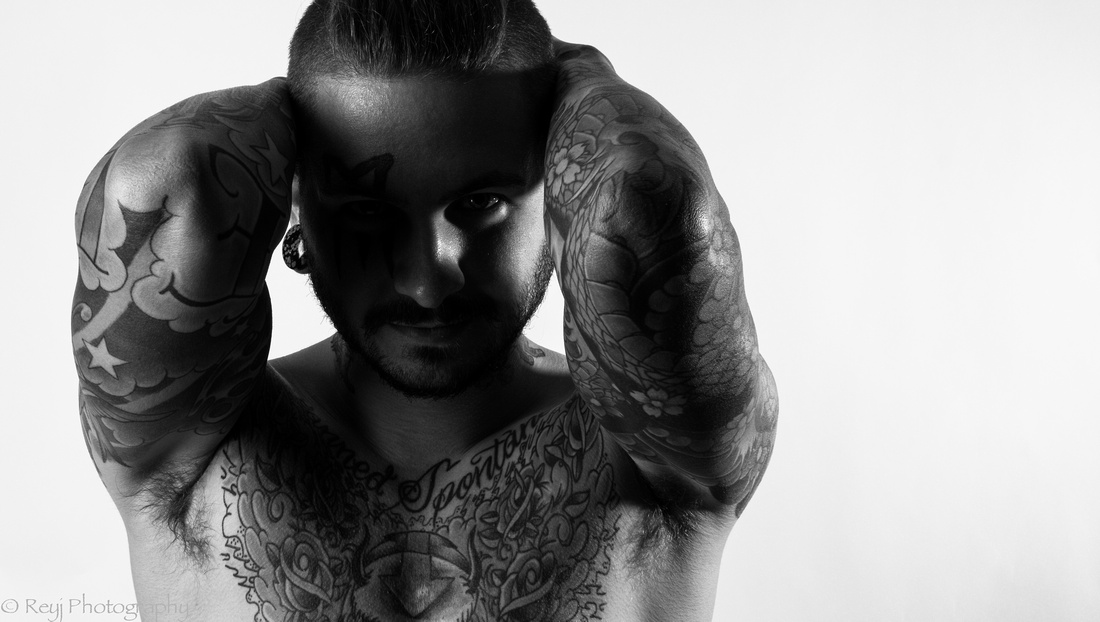 In addition to the one above, I also ended up loving the image below.  I definitely love the lighting in the image as well as the overall placement and pose.  However, I like that it captures a bit of his personality.  I love that you can see the twinkles in his eyes as well as the laugh lines around the edges of his eyes.  I also love that it captured his easy-going smile in mid-laugh.  Yeah, it's just an image that I find myself smiling at each time that I come across it in my catalog.  And, of course, it's currently the image that I have highlight when you first come to my page.  This image is definitely one of my favorite images from my entire catalog. 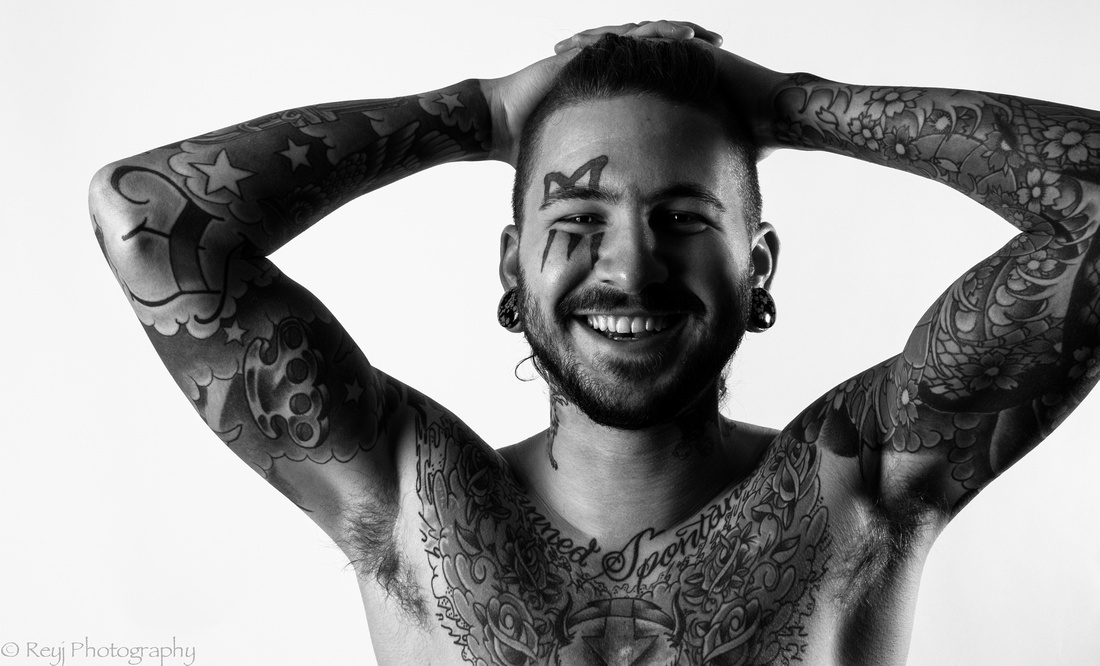 However, my absolute favorite image from the entire photo shoot is the one below.  When I originally finished editing the images back in April 2015, I had exported the final image in color.   I will say that the image looks good in color, especially since his blue eyes captures the light in a stunning manner.  However, when I was looking at the images to highlight in the blog entry, I decided that I needed to see how the image would look in black and white.  And I am glad that I did take the opportunity.

For me, some of the details get lost through the presence of colors, especially given the vibrancy of some of the colors found in his tattoos.  In the black and white image below, I am able to marvel at all of the minute details that would have been lost otherwise.  From the highlights on the ear plug and nose ring to the details of each hair of his beard to the dazzling detail of his eye.  For me, all of those details would have been lost with the presence of color.  But it's all of those details, the position his head and shoulders, and the lighting that come together to make this image an interesting portrait in my opinion.  And of course, it's easy to see why this image is my favorite from the photo shoot with Joey. 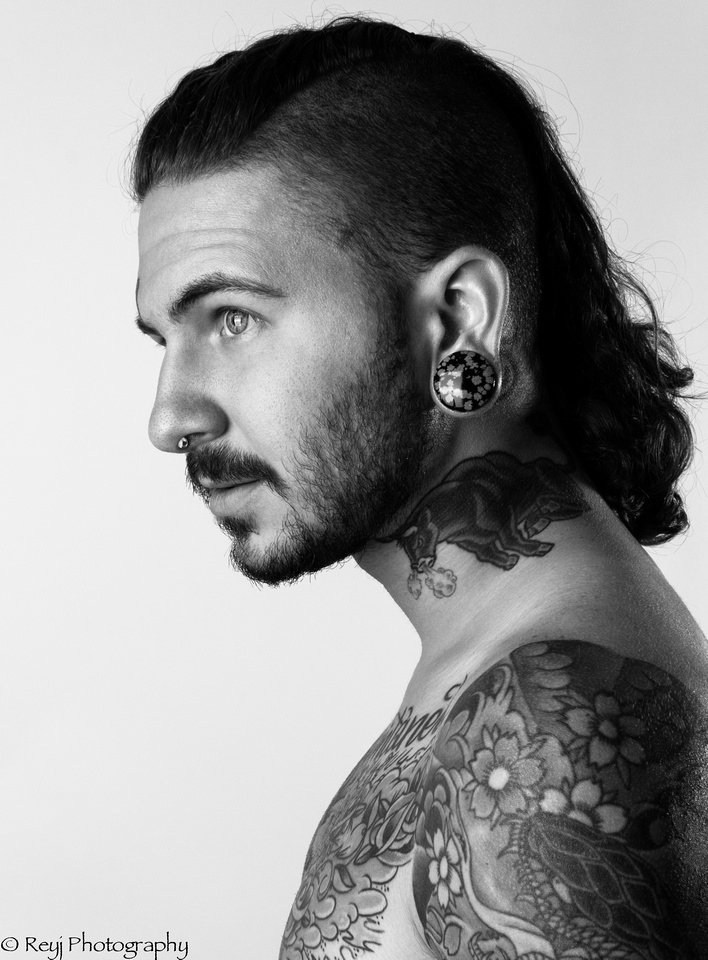 Overall, I loved worked with Joey throughout the shoot!  He was definitely fun and easy-going throughout.  Plus, it felt like I was working with a friend (though I have never photographed any of my friends in similar states of undress - but there's always future chances, I guess) as we connected about our experiences in Indiana.  I am definitely glad that I was provided the opportunity to work with and photography such an interesting and unique individual and definitely wished that I had the opportunity to work with him again before he moved to California.  Nonetheless, I am grateful that I was able to come across him in my life and had the opportunity to create some stunning images with him.