Hey guys!  I can't believe that January has already come and gone!  Time definitely seems like it's flying.  Of course, photography has definitely been a big part of my spare time lately, which is awesome!  Recently, I've been working on editing some images from a few photo shoots from 2014 and 2015.  Those edits are coming along well and I'll eventually be posting some of my favorite images from those photo shoots when the time comes.

Additionally, I also had the opportunity to work with a male model in January.  I definitely enjoyed the experience and had fun trying out some new techniques with him.  Some of those new ideas worked well, but others didn't work so well.  However, it was definitely fun experimenting with different ideas during the photo shoot and just trying new things.  And, of course, it's given me some additional ideas for concepts to potentially try in the future.  Nonetheless, in looking through the images during the import process, I definitely saw several images that I'm wanting to work on from the photo shoot.  I really can't wait to start the editing process on those images and eventually share my favorite ones with you guys.

On top of that, I am taking a photography course, Color II, at the local community college.  I was attempting to take an architecture photography course, but I don't think it's going to make.  In reality, I only took Color II because I needed a lab course to go along with the camera course, but I'm probably going to stick with the Color II course since I already paid for it and the fact that's a prerequisite for some additional courses.  Plus, it will be nice to get some additional in-person instruction on Photoshop and Capture One.  So yeah, that's definitely taking up some of my time during the evenings.

So yeah, I'm definitely happy that photography is starting to become a more integral part of my life, especially as I'm starting to balance it a little better in relation to my full-time job.  I'm definitely happy that I'm able to devote more time to it and work on a variety of different projects with male models as well as architecture.  It's even gotten to the point where I think that I might be able to take some additional photography courses at the local community college and potentially go through the entire degree plan.   So yeah, that's definitely going to be cool since it will only help me with the different projects that I'm working on in my spare time.

For now, let's talk about the photo shoot that I did with Jeremy.  He was the fourth model that I photographed in December, and definitely proved to be one of my favorite ones.  I absolutely loved his confidence and laid-back attitude throughout the shoot.  We talked about a variety of things throughout the shoot and established an easy rapport throughout it. 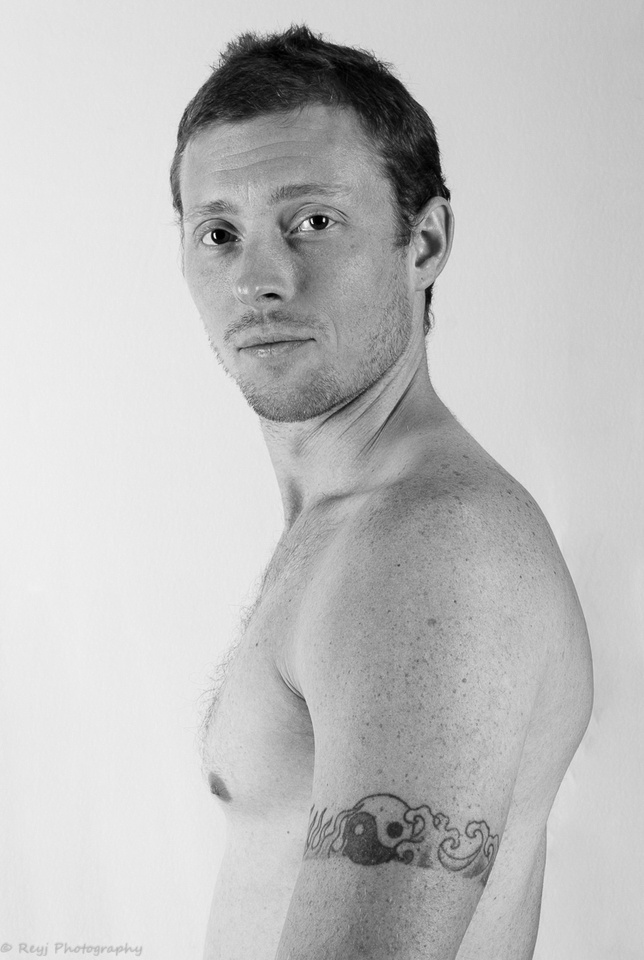 One of the cool things about Jeremy is the fact that he is a trained dancer.  I definitely loved working with him as we went through a series of dance poses during the shoot.  However, I'm going to post those images as a separate series since I had so many to choose from and wanted to highlight them separately.  Still, it was definitely one of my dreams to actually photograph a dancer and I fulfilled it with Jeremy.  Of course, I'm still wanting to photograph some other dancers since I love watching them go through the different movements and moving their bodies in a way that seems seamless.

I definitely love the image below.  Of course, I love the lighting and how it plays across his body.  I definitely think it's interesting as it crosses his face to create some interesting highlights and shadows.  It definitely helps to accentuate his facial expression as well.

In addition to the lighting, I love the pose in the image.  I love that he's looking straight at the camera, but the majority of his body is posed as a profile shot.  It definitely helps to highlight the muscles in his chest and slope of his shoulders and upper back.  The slight twist of his hips definitely helps to add some depth to the image as well and the placement of his right arm.  Overall, the image is definitely one of my favorite ones from the series. 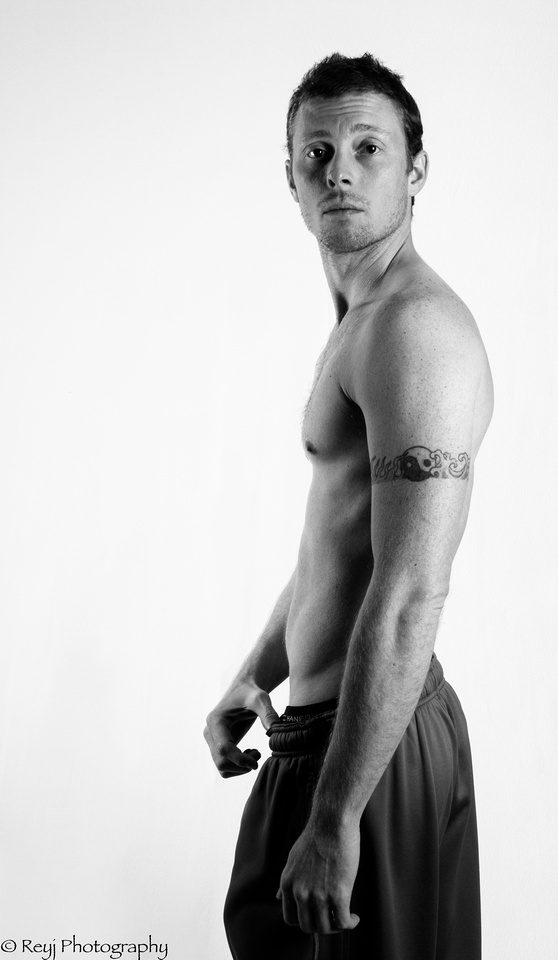 As you guys know, I tend to photograph guys posing in a variety of underwear.  The photo shoot with Jeremy was no different.  However, there are two images that I wanted to highlight from portion of the shoot since I couldn't decide which one was my favorite between the two of them.  Of course, Jeremy was wearing Papi boxer briefs in both images.

In the image below, I had Jeremy pose in a pair of yellow Papi boxer briefs.  I definitely loved the way they looked on him and how they highlighted the lines of his body.  However, in the image below, I loved the teasing element associated with Jeremy pulling down the right side of the boxer briefs to create an interesting diagonal at his hips.  I think it creates a point of interest in the image that helps to drive the viewer's eye to his left arm and back up to his face.

In addition to the briefs and the diagonal created, I love the lighting in the image.  I love how it caresses the planes of his body and how the left side of the image becomes darker with the shadows.  I also love how those shadows are created at various points of his body to show his muscle definition, such as the lines at abs, chest, and near his hips.  Yeah, like all photographers, I am obsessed with lighting and how it accentuates the subject matter - Jeremy's body in this case. 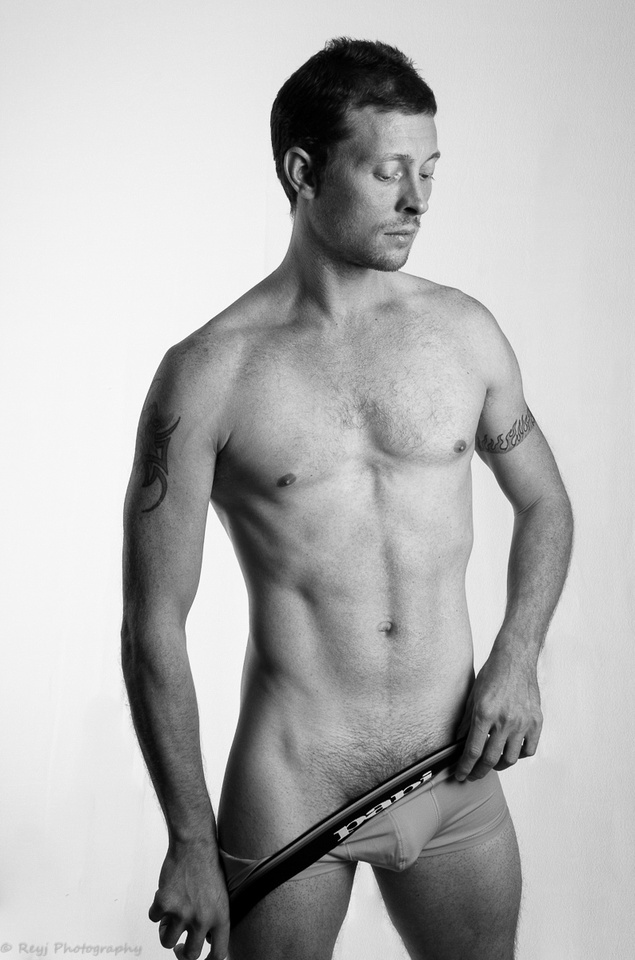 In addition to the Papi boxer briefs, I like Jeremy's pose in the image.  As with the first image, I do like the mostly profile pose.  I like how it highlights his chest and back and how they lead down to his narrow waist.  Of course, I do like the subtle hint of the curves encased in the boxer briefs and how they lead down to his thighs.  It's definitely a good pose to highlight Jeremy's body.  And, of course, I love the fact that Jeremy's looking down over his shoulder.  To me, all of the elements helps to create an interesting image that I wanted to highlight in the blog entry. 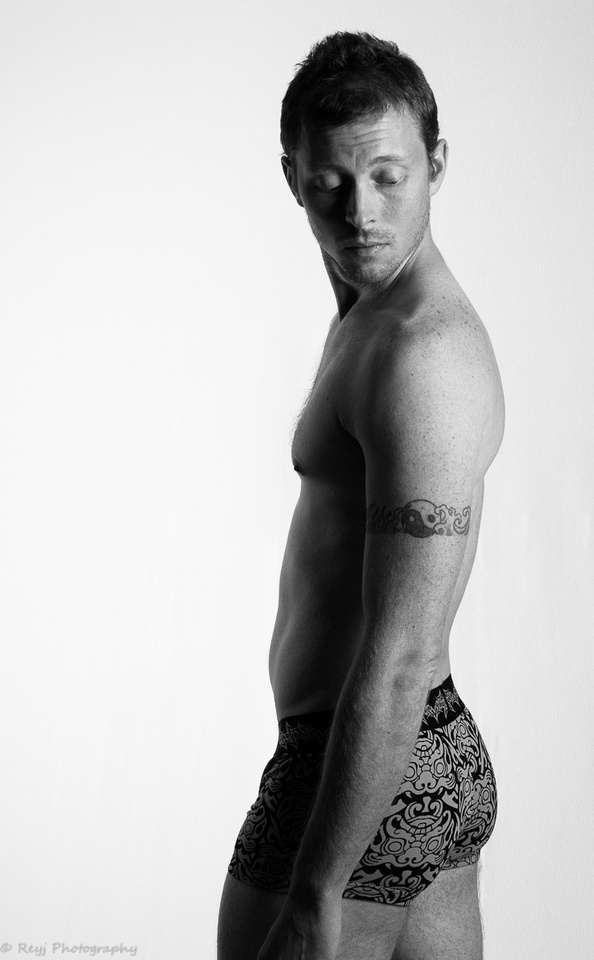 I will note that I'm planning a separate gallery and blog entry that will highlight another set of images of Jeremy posing in a pair of briefs.  That set of images has been separated out due to the number that I ended up liking from that short series.  That series will be posted separately with a blog entry to highlight my favorites from that short series.

As I mentioned, I'm breaking up this photo shoot into three pieces.  The image below is my favorite image from this portion of the photo shoot.  Once again, I like the lighting in the image, but it really is the pose and facial expression that makes it my favorite.  Yes, Jeremy is completely nude in the image, but I love how comfortable and at ease he looks in the image.  I think his facial expression definitely conveys that feeling.

I definitely love the pose in the image.  I love how the various lines intersect such as his left leg leading up from the corner of the image before being intersected by his arm.  I also love how his line of sight is pointed directly at his right knee to help tie in the various lines.  To me, it's definitely an interesting composition due to all of the intersecting lines created by his limbs.  Between the lighting, the pose, and the overall feeling of the image, it's definitely easy to see why this image is one of my overall favorites from my entire catalog. 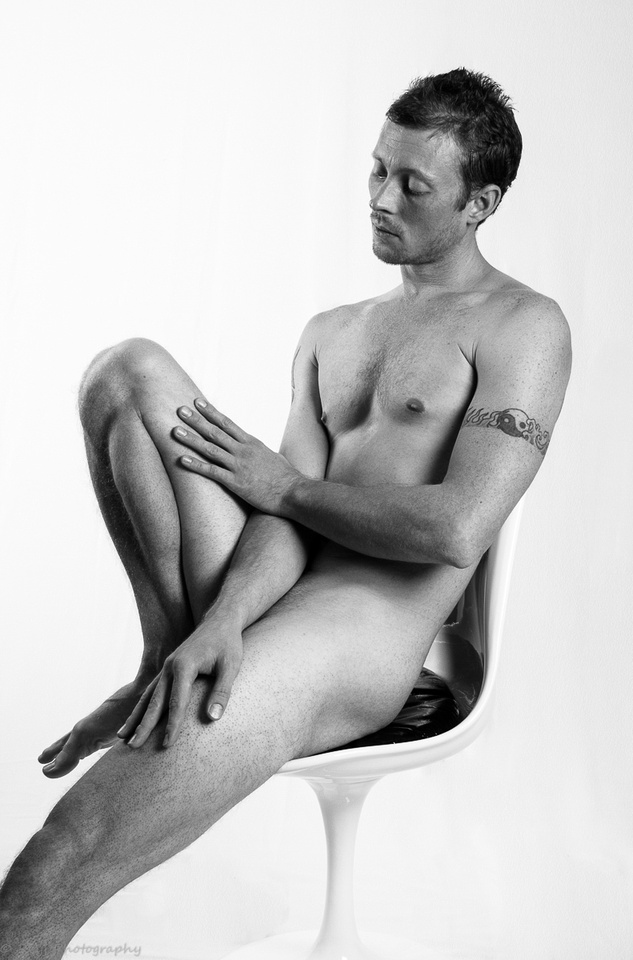 Working with Jeremy was definitely an honor.  I know that I don't usually say that about my various photo shoots, but working with Jeremy definitely was a intense experience.  As I mentioned before, I decided to break up the photo shoot into three different segments because each one felt like it could be a stand alone segment.  I definitely love several of the images that came out from this portion of the shoot, especially the ones highlighted in this blog entry.  And I definitely love the image highlighted as my favorite image from the shoot.

However, I can't wait to start sharing the images from the other two portions of this shoot.  I'll be working on posting the next portion of the shoot in the upcoming couple of days.  I think it should definitely be cool to say the least.

If you want to check out some of the other images highlighted from this portion of the photo shoot, check out the gallery at http://www.reyjphotography.com/jeremy.

If you want, you can also check out my Instagram at https://www.instagram.com/reyj.photography/.

And, if you're interested in setting up a photo shoot, feel free to email me at [email protected].