I can't believe that February came and went and March is following in its footsteps.  It's definitely been a busy couple of months.  I traveled across part of Texas in February - went to Ft. Worth and Houston within the span of a week.  It was a work-related trip, but I definitely took some time to work with a male model in Houston and was happy with the images that came out of the photo shoot.  I'm still in the process of editing those images, but I definitely like what I'm seeing on the computer screen.

Of course, I'm also trying to line up some additional photo shoots with some male models in the next couple of months.  I've got one tentatively scheduled in San Antonio next month and am definitely looking forward to working with him.  I'm also looking to schedule a couple of additional shoots here in Austin before summer rolls around, but we'll see how successful I am in that venture.  Overall, I'm definitely happy with the progression with my photography work, especially as I'm trying to balance it against a full time job.

As I mentioned in the previous blog entry, Jeremy is a trained dancer and has worked with a dance company.  When I found this out, I definitely changed my idea for the photo shoot and asked him to be prepared to do through several dance moves during the shoot.  I was definitely anticipating this portion of the photo shoot and hoped that the images would look as beautiful as Jeremy's precise movements from pose to pose.

In addition to the carefully orchestrated movements, I also love how Jeremy was able to hit a pose and make it look elegant and powerful.  For me, that is why I love the image below.  I absolutely love the lines created by his body, particularly his legs and arms, but I absolutely love the sense of power that is evident in his shoulders and the serious facial expression.  I also think that the image clearly captures Jeremy's confidence as well as how comfortable he is in how body.  For me, this is one of my favorite portraits that I have captured. 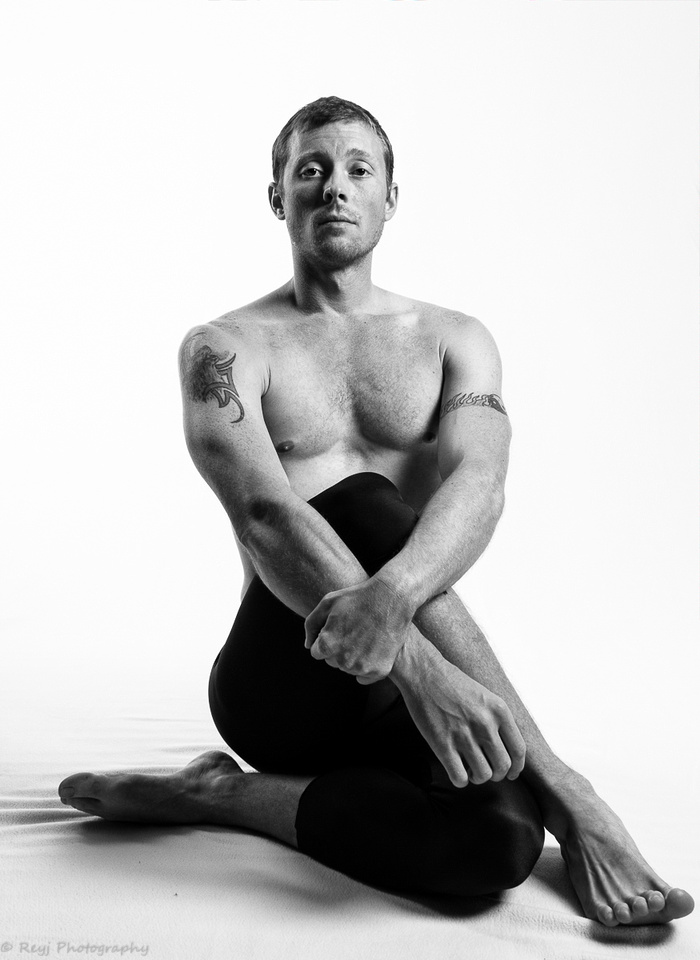 Along the same lines as the image above, I love the image below for similar reasons.  Again, I love the lines that his legs make as well as the those in his arms.  Additionally, I love the additional depth that is evident through the position of his legs as well as the twist of his hips.  To me, it definitely is a dynamic pose that captures the beautiful lines of Jeremy's body.

As with the image above, I also love the seriousness of his facial expression as he gazes to the right side of the image.  Of course, I was drawn to Jeremy's strong profile from the slope of his nose to the strong jawline.  His facial features in combination with the lighting creates a dynamic lighting pattern as it transitions from highlights to the shadows around his jawline.  As with the image above, I absolutely love the image below and count it amongst my favorite images that I have had the opportunity to capture. 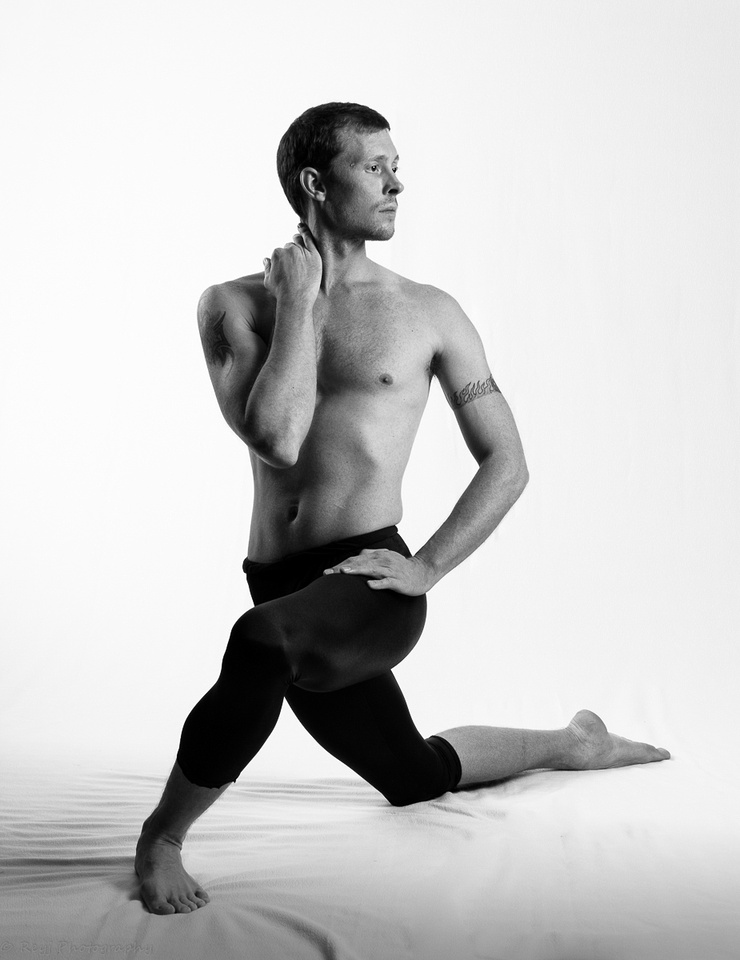 I am always amazed watching dancers gracefully move from one pose to the next.  As we were going through the photo shoot, I found myself in awe of Jeremy's body and strength as he transitioned from one movement to the next.  For me, the image below captures that sense of movement while also capturing his strength and precision.  In the image, you can see that he is holding his body weight with his fists.  What is not shown were the slow extensions of his legs and the act of pulling them back towards his body in slow and precise movements while holding his entire body weight on just his fists.  However, you do not see any signs of stress in his facial expression indicating that he did not have any difficulty with the movement.  To me, that simple demonstration of power was amazing.  Of course, I am absolutely happy that I was able to capture part of that transition in the image below.

As with the images above, I am absolutely happy with the lighting in the image.  I like the transition of the highlights to shadows are the light drops off towards the lower part of his body.  However, I do love that the light is able to create highlights, midtones, and shadows in his black tights.  Additionally, I love the shadows on the floor that were created by his body and crossed legs.  Yeah, I'm definitely happy with the overall image and the movement that was captured within it. 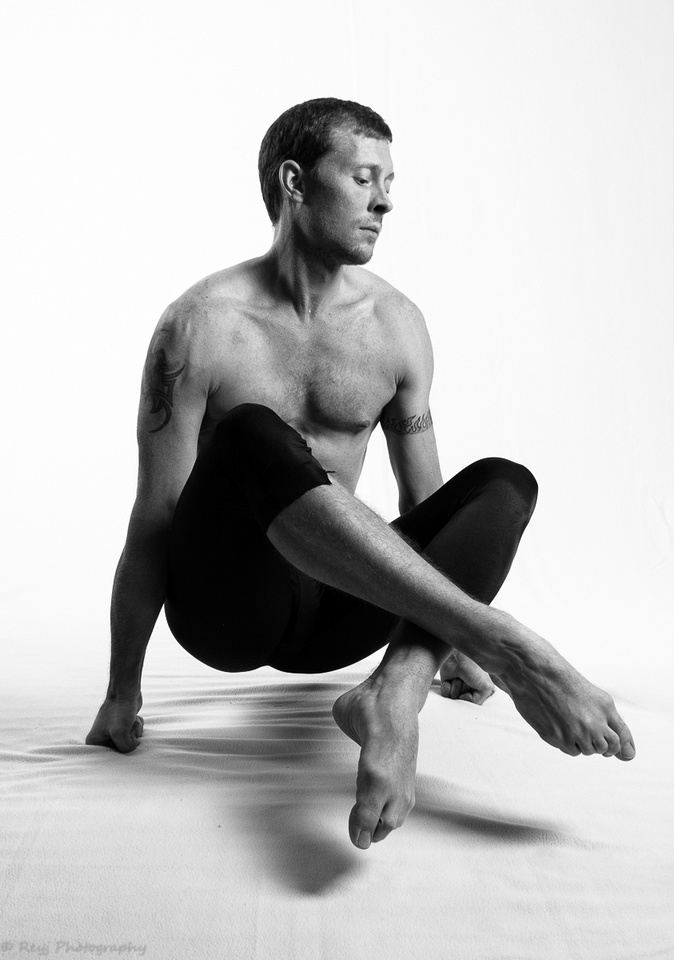 As you guys know, I tend to capture the model posing in a variety of underwear throughout the shoot.  In the previous gallery and blog entry, I highlighted several images of Jeremy posing Papi boxer briefs and others.  However, when I was setting up the shoot and bouncing ideas with him, he asked me if I wanted him to bring the dancer's pouch that he wore while dancing.  Of course, I jumped on the chance without really having a clear picture of what a dancer's pouch was, but I was definitely happy that I had him bring it.

I love the image below for the slight tease that Jeremy is presenting.  I love the casual display of the dancer's pouch as well as his upper thigh as Jeremy pulls down the left side of his tights.   Of course, I love how the light highlights the creases in the dancer's pouch and helps to lead the viewer's eye further down.  In addition to this small creases, I love how the light tapers off from the highlights on the right side of the image and descends into shadows as the viewer's eyes moves to the left.

However, I love the pose even more.  I like the placement of his arms and hands as he lowers the left side of his tights.  Of course, I love how the light picks up several of the details, such as the veins on his hands and the muscle definition in his forearms.  I also like how they are serving as leading lines directing the viewer's eyes to different parts of the image.  Additionally, I love how the lighting pattern falls across his arms, and body in general, as well as how his hands stand out against the black tights and the white background.

Finally, I love the positioning of his head.  I love how he's not making eye contact with the viewer and gives the impression that this is a private moment.  I love how the tilt of his head helps to reinforce the leading lines and helps to direct the viewer's attention to his left forearm and then down to the bottom of the image.  On top of that, I love Jeremy's gentle facial expression.  It helps to strengthen the calming feel of the image as well as show how comfortable Jeremy is with his body.  With all of these elements combined, it's definitely easy to see why the image below is one of my favorite images from the photo shoot. 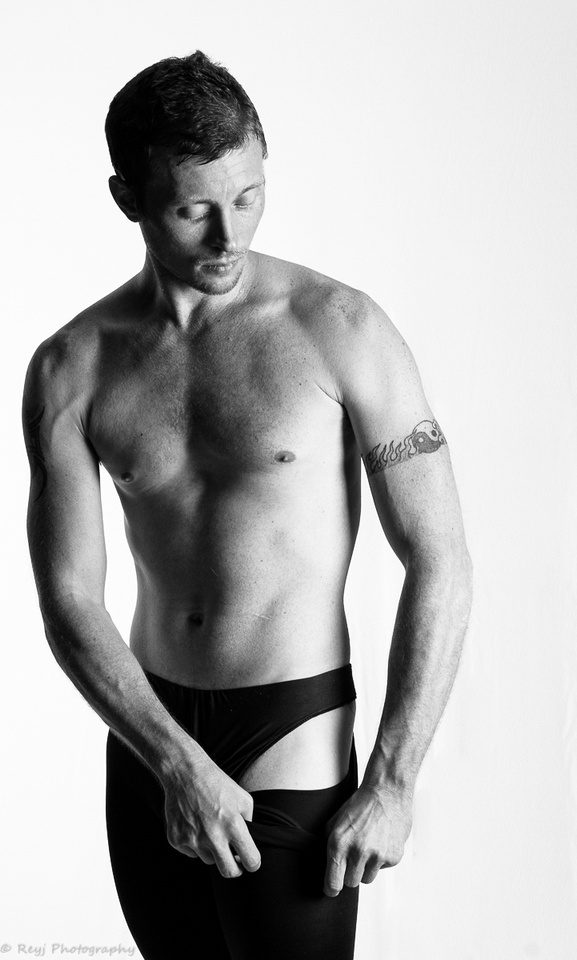 Favorite Image From The Photo Shoot

As I have been indicating throughout the shoot, there is definitely a sense of power and grace within Jeremy's body that easily seen as he moves from one pose to another.  For me, I love the strength that is displayed in the pose as he reclines back with his only support coming from his legs.  There are no telling signs that indicates that Jeremy is stressed in holding the pose.

In addition that casual display of strength, I also love how elegant the pose appears.  I liked the placement of his open hand across his chest and how it gives a subtle hint of movement.  I also like the subtle turn of his shoulders as it helps to create some additional visual depth in the image.  I also love the placement of his left hand and arm as it directs the viewer's eye to the lower part of his body.  Finally, I absolutely love Jeremy's facial expression and the calmness reflected in it.  All of the elements, in combination with the lighting, definitely helps to establish the image as one my overall favorite images in my catalog. 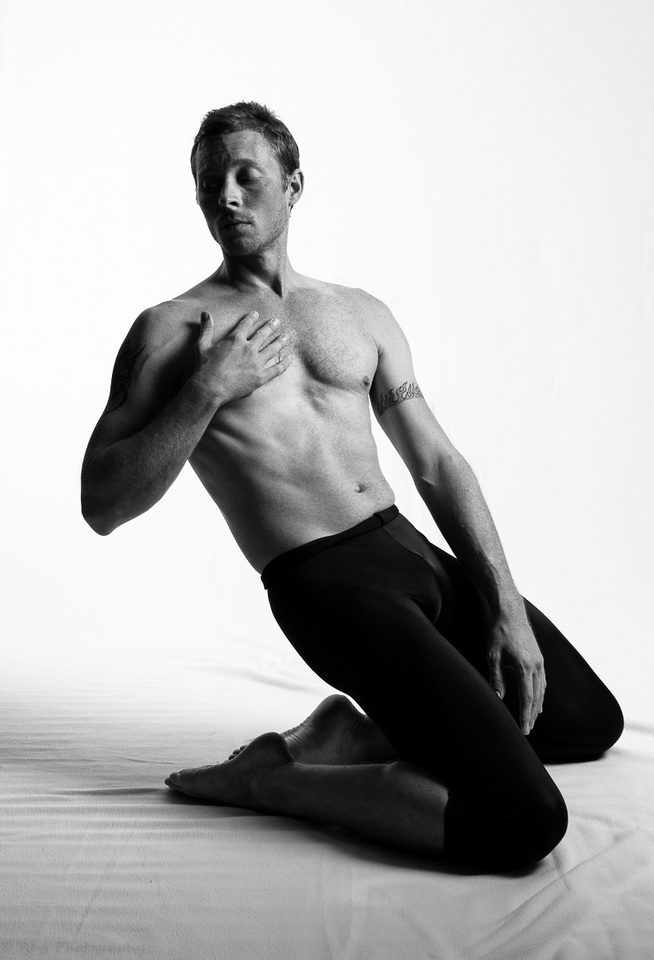 There are several items on my photography bucket list that I want to accomplish.  One of those was to have the opportunity to photograph a dancer as they went through a series of movements.  Sure, when I originally wrote the idea down, I thought that I would be photographing a ballerina or potentially a ballroom dancer.  However, after watching so many seasons of So You Think You Can Dance, I knew that I would want to photograph a contemporary dancer.  It was just my luck that I was able to work with Jeremy, a dancer trained in ballet, and capture him working through several movements that felt contemporary to me.

Overall, I am definitely happy with the images that Jeremy and I created during the photo shoot.  Sure, I may have gotten a little overwhelmed by the feels as I watched Jeremy effortlessly and gracefully moved from pose to pose; I may have even let a few tears escape as I moved by the overall beauty of Jeremy's movements.

Of course, I am hoping to work with Jeremy again in the near future in order to create some additional magical images.  Here's hoping that I have another opportunity to work with such a talented man!