Hey guys!  Another month down and it looks like April is following March in its footsteps.  It's definitely been a busy month at work and hasn't really given me a lot of time to work on any photography projects.  I am hoping that it slows down for a bit, but I never know with my current job.  Still, I have been able to post some images on the website as well as my Instagram (https://www.instagram.com/reyj.photography/).  Additionally, I'm trying to set up a photo shoot for this month, but it seems like work is getting in the way of it.  Still, I have high hopes for it.  However, let's get to the photo shoot that I did with Enrique in December 2013.

As you guys may remember, I photographed eight models in eight separate shoots in the span of a week in December 2013.  Enrique was the fifth model that I worked with during that week.  When he first submitted his images, I was definitely attracted to his facial features, particularly his eyes.  When I first saw his images, I instantly knew that I wanted to photograph him because of those features.  For me, I definitely loved how the images turned out with his serious facial expression.

As with all of my shoots, I like photographing the model in the clothes they wear to the shoot.  In this instance, I loved how Enrique looked in his black bottom down shirt, black jeans, and cross.  With the white backdrop, the dark clothes definitely helped to make him stand out.  Even more so, I loved how the black shirt looked on him and how the buttons caught the light, as seen in the image below.  I will say that this is one of the looks that I like on guys quite a bit because it dresses up a pair of jeans quite nicely.  Plus, a button down shirt is pretty versatile in that unbuttoning a few buttons can change the look completely.  So yeah, I love using these shirts during photo shoots.

In addition to the clothing, I like the stance in the image.  While it's not terribly exciting, I like how casual it looks and is somewhat iconic of the typical young man.  There is a sense of defiance within his body language, especially with the tilt of the head and the somewhat bewildered look on his face.  However, he's not backing down from the challenge.  Like I said, it's a somewhat typical stance of the young man.

Additionally, I love the placement of his hands.  During one of my photography classes, I photographed another guy in a similar stance.  However, when I asked my lab instructor what he thought of the image, he noted that placement of the hands made it seem like I was directing the viewer's eyes towards his crotch.  When I asked my camera instructor what he thought about the pose, including the comments made, he just laughed and said that most young guys wanted to have attention directed there.  Nonetheless, I still like having a guy pose with his thumbs within the pockets of his jeans and his fingers splayed across his upper thighs.  Though, I am a little more careful of the finger placement though.  In this image, I love how Enrique's long fingers are splayed down across his thighs and curl slightly.  It adds a interesting visual element without distracting from the overall image.

Finally, I love the lighting in the image.  As usual, I went with a split lighting pattern while having another light to slightly open up the shadows on the left side of the image.  However, I do like the dramatic lighting and how it spreads across his face and body to creating an interesting lighting pattern.  I love how it picks the details of the veins in his forearms and hands as well as highlight his cheekbones.  Yeah, I absolutely love the light in the image below.  With everything combined, it's definitely easy to see why the image is one of my favorites from the photo shoot. 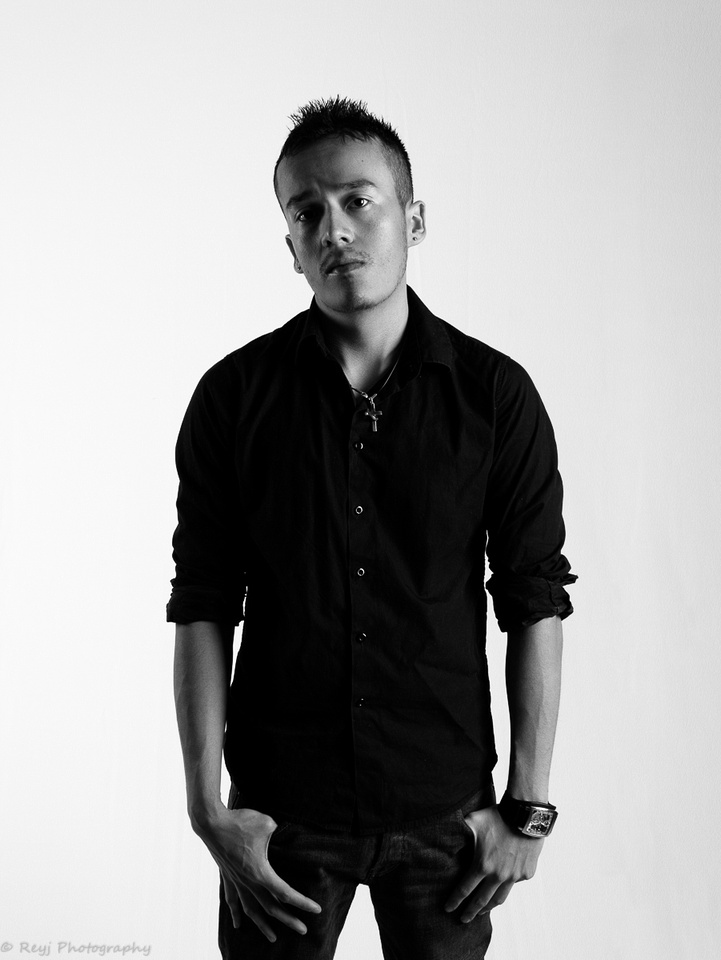 Of course, I definitely wanted to photograph Enrique in a variety of underwear.  Usually, I would photograph the model wearing just the underwear; however, I absolutely loved how he look in the black button down shirt and wanted to continue dressing up some of the images.  As I mentioned above, I love how versatile a button down shirt can be.  By unbuttoning the top three buttons, it creates a different overall look as the viewer gets a hint at the skin below the material.  I've always liked that hint of a tease of what lies hidden beneath the fabric.

I also unbuttoned the last button at the bottom of the shirt in order to create a wider opening.  I definitely wanted to create an element that would frame the bulge within Enrique's briefs as well as direct the viewer's attention towards it.  While the opening isn't completely in alignment, the edge of the fabric definitely helps to direct the viewer's eyes to an interesting element within the image.

In most images highlighted under this category, I usually highlight the underwear since that is all the model is wearing in the image.    In this image, the underwear is definitely interesting in the outline seen through the cotton and how it's highlighted by the black edge of his shirt.  However, I love how Enrique's thumbs are trapped within the waistband of the briefs and are brining it down.  It's more evident on the right side of the image, but it's there on the left side as well.  He's just mere moments from pulling them completely off, but the moment captured definitely has a sexual appeal to it as well.  Sometimes, it's all about the anticipation. 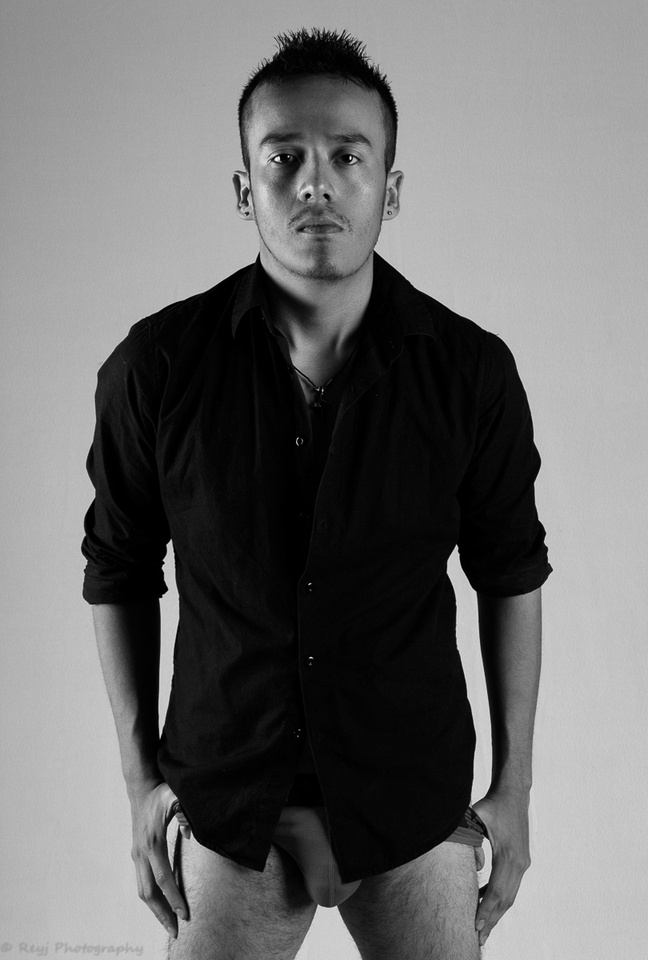 And sometimes it's all about the tease.  Usually, I would be highlighting my favorite nude from the photo shoot, but I really liked how Enrique looked in that button down shirt.  There are several images in the gallery dedicated to the photo shoot (http://reyjphotography.com/enrique) without the modesty of his hand; however, I decided to highlight the image below as my favorite.

As I mentioned above, sometimes it's all about the anticipation of seeing your lover for the first time.  At other times, it's all about teasing or being teased by your lover.  In the image below, I loved that that Enrique is only wearing the black button down shirt and is nude from the waist down.  However, his hand is providing some modesty by covering himself in an effort to tease the viewer.  For me, I absolutely love the placement of his hands.  I like how his left hand is gripping his right shoulder which helps to lead the viewer's eye down his right arm to his right hand. 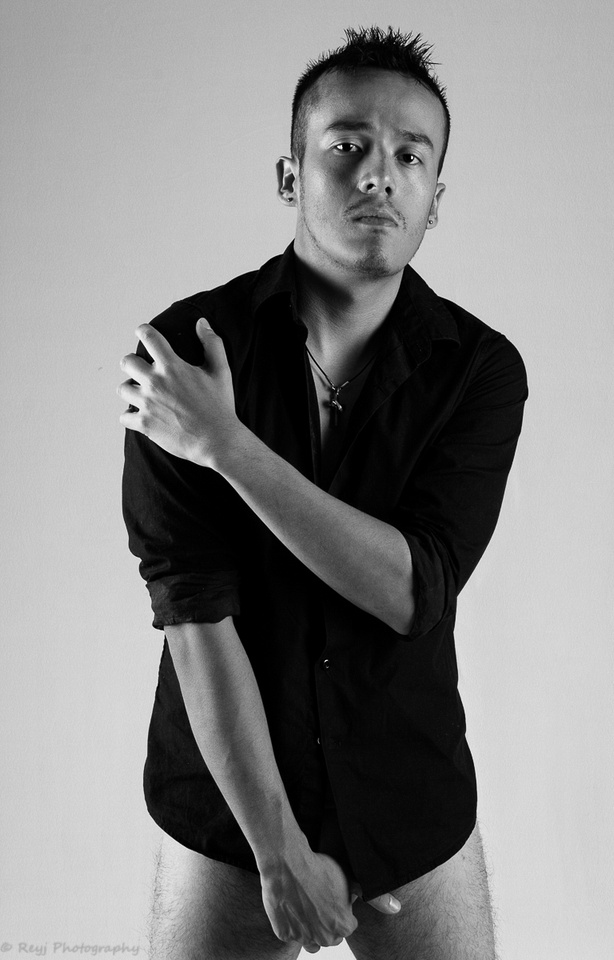 My favorite image from the photo shoot turned out to be a portrait.  Fun fact: when I captured the image below, Enrique was nude from the waist below.  Yeah, that's an interesting snippet from the photo shoot.  However, I loved his facial expression in the image and wanted to capture it in a portrait.  To me, there's a sadness within his facial expression that first caught my attention when he submitted his images for consideration.  When I saw that look in his images, I definitely knew that I wanted to capture it.

Of course, I love the lighting in the image.  I love how the light highlights the left side of his face and tappers off towards his right.  However, I was using a light on the right side of him to open up those shadows on the right side of his body.  It definitely helped to pick up the details within his hair, the piercing in his ear, and the details of his skin.   For me, it's definitely the lighting that makes the image my favorite from the photo shoot. 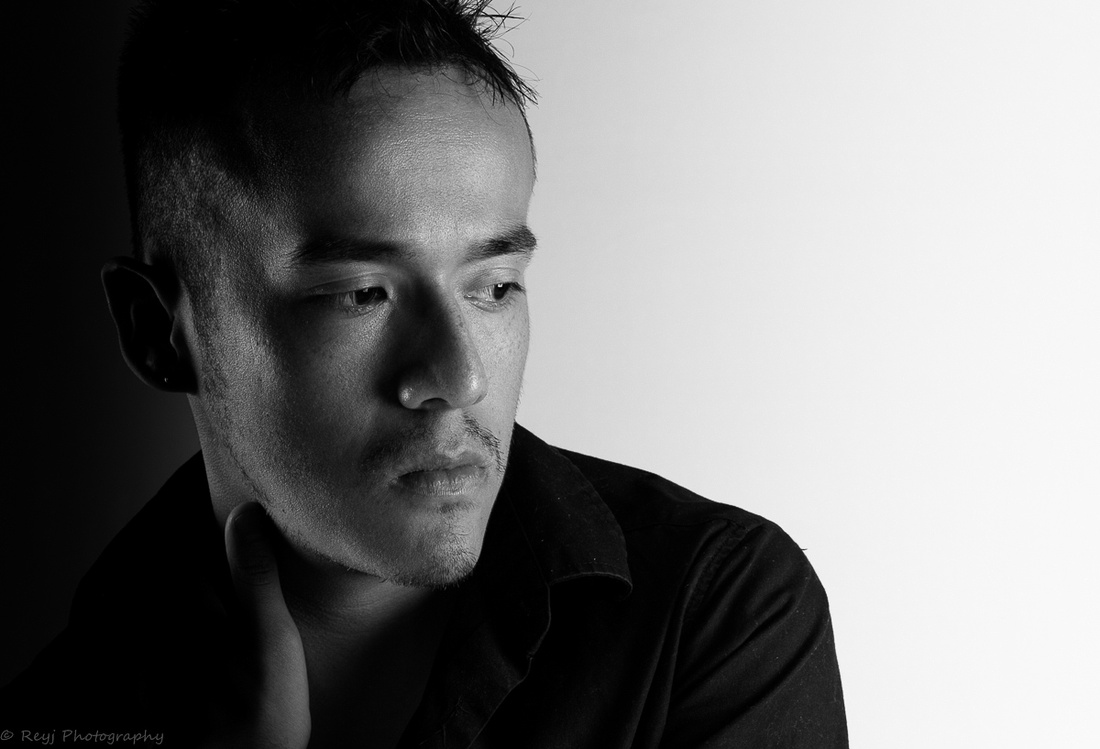 I absolutely loved working with Enrique throughout the photo shoot.  While I mentioned that I loved the sad look in facial features, Enrique was anything but sad throughout the shoot.  He was definitely on the serious side, but I was able to easily engage him in conversation as I learned about his life.  Of course, I absolutely loved photographing him in his black button down shirt and how it created an interesting look for me to work with throughout the shoot, especially when I paired the shirt with different pairs of briefs and boxer briefs.  Overall, I'm definitely happy with the images that we created throughout the shoot and the fact that I was finally able to share them with all of you.

And, of course, I'm definitely hoping to work with Enrique in a future photo shoot!

If you want, you can also check out my Instagram at: http://www.instagram.com/reyj.photography/.

If you are interested in setting up a photo shoot, feel free to email me at [email protected].