Hey guys!  It's been a while since I last posted a blog entry, but I wanted to thank all of you for your continued interest in my body of work!  I definitely appreciate it!  Of course, even though we're in June 2016, I'm still working through my catalog in an effort to post galleries and blog entries based on the chronology of my work.  Given that, I'm still working through the photo shoots that I completed in December 2013.  After the entry about about the photo shoot with Robert, I will only have two more December 2013 photo shoots to work through before we jump to 2014.  So yeah, I'm definitely excited to move on from 2013, but I am enjoying seeing the progression of my work through the postings and entries.  With that, let's move on to the entry about the photo shoot with Robert!

I absolutely loved working with Robert throughout the photo shoot.  When I first came across his portfolio on Model Mayhem, I was instantly drawn to his hair.  While I am definitely on the look out to work with attractive guys, I'm also looking to work with guys that have an interesting feature that draws me in - whether it's a facial tattoo or an abundance of curly red hair that looks like an afro, as was the case with Robert.  Of course, I did find him attractive, but I was instantly drawn to him because of his hair.  However, there were several other images on his portfolio that showed him with short cropped hair, but I was hoping that his hair was still grown out.  I definitely lucked out though.  While it was not as grown out as in some of the images on his portfolio, I was still happy with the length and the curls that were easily seen.

As you guys know, I like photographing a male model in the clothes they were to the shoot in order to help us get comfortable with each other.  When Robert showed up to the shoot, he was wearing a stripped button down shirt with jeans.  I did take several images of him dressed like that, but I was definitely more interested in the look that was created with the Mighty Morphing Power Rangers shirt that he wore beneath the button down.  To me, it definitely recalled some of my childhood memories of watching the show after school, but I definitely loved how it seem to make him appear younger as well.  That's part of the reason why I love the image below.

In addition to the clothing, I love Robert's stance in the image.  The placement of his hands helps to add some depth to the image, particularly with how his right hand helps to create some separation from the background.  Additionally, I love the slight turn of his body from his shoulders to his hips as it creates some visual interest for me.  However, I absolutely love his facial expression.  While I loved capturing several moments of him laughing and smiling at something that I had said, I love his serious expression and how his eyes completely standout in the image. 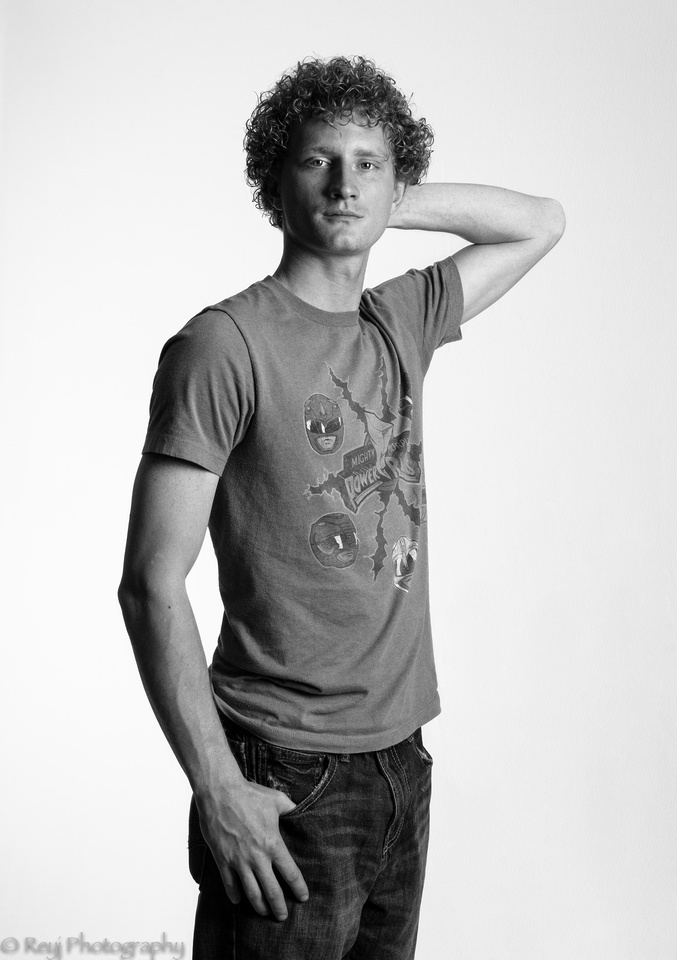 In addition to the image above, I also wanted to highlight the image below.  The image also comes from the start of the photo shoot, but I love how it turned out.  As with the image above, I absolutely love the lighting.  In addition to loving the gradation, I love how the light showcases several of the attributes of Robert's body such as the veins in his arms and hands as well as the muscle definition in his abs and chest.  Finally, I love how the light dances across his face as he turns towards the light.  It definitely helped to highlight several of the curls around his forehead as well as making his eyes standout.  Yes, it's definitely easy to see why the image below is one of my favorites from the photo shoot. 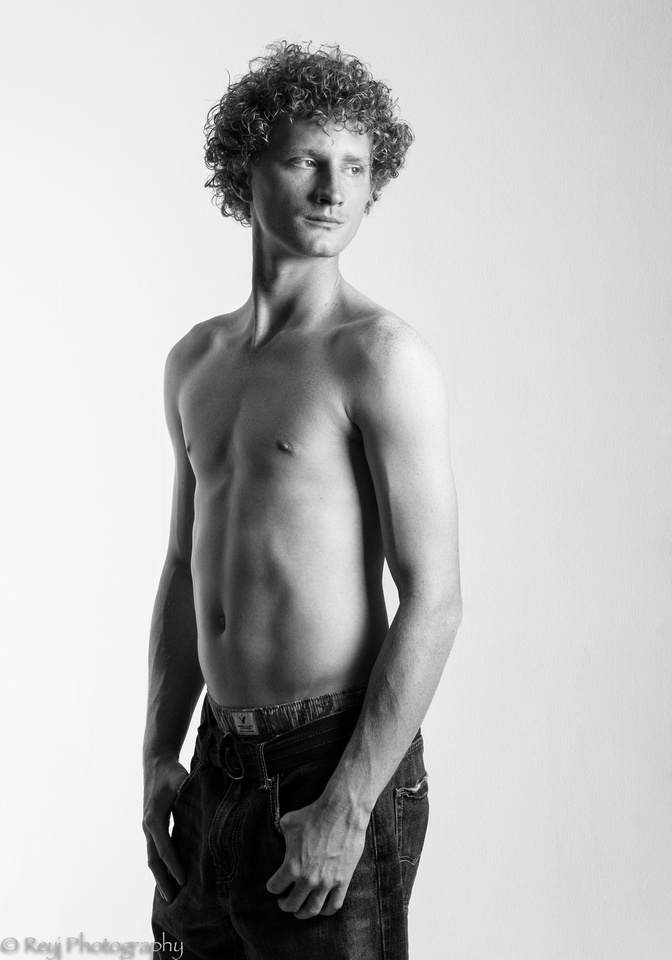 Of course, as you guys are well aware of, I love photographing guys in a variety of underwear.  As you can see in the gallery (http://www.reyjphotography.com/robert), I photographed Robert in a variety of underwear including white Calvin Klein briefs, black boxers, and multiple pairs of Go Softwear briefs.  However, as I was looking through the images to select one to highlight for the blog entry, I instantly choose the image below.  It comes from the end of the photo shoot when I was photographing Robert in a pair of Go Softwear briefs with pink stripes.

The reason I love the image below is how the light highlights his body due to the pose.  I absolutely loved how his body is turned away from the camera while also creating a profile shot of his upper body.  As my eye travels throughout the image, I'm instantly drawn to his shoulder and arm and how it leads down to his hand toying with the waistband of his briefs.  I also like how you get a hint of a curve through the stripes of his briefs as it stretches across his bottom.

Additionally, I love the lighting playing across his back.  As it wraps around his abs and waist, I love how it transitions into shadows with a jab of rim light leading down towards the briefs.  It definitely adds an element of interest that captured my eye when I first looked at the image.

Finally, I love how the lighting canvasses his face.  While there are some highlights scattered across his face, I liked how it is mostly midtones and shadows due to his face being turned away from the light source.  I also love how his eyes continue to standout as a focal point.  They are further helped along with the serious facial expression with a hint of smile gracing his lips.

Overall, it was definitely an easy choice for me as looked through the images to highlight for the underwear portion of the blog entry. 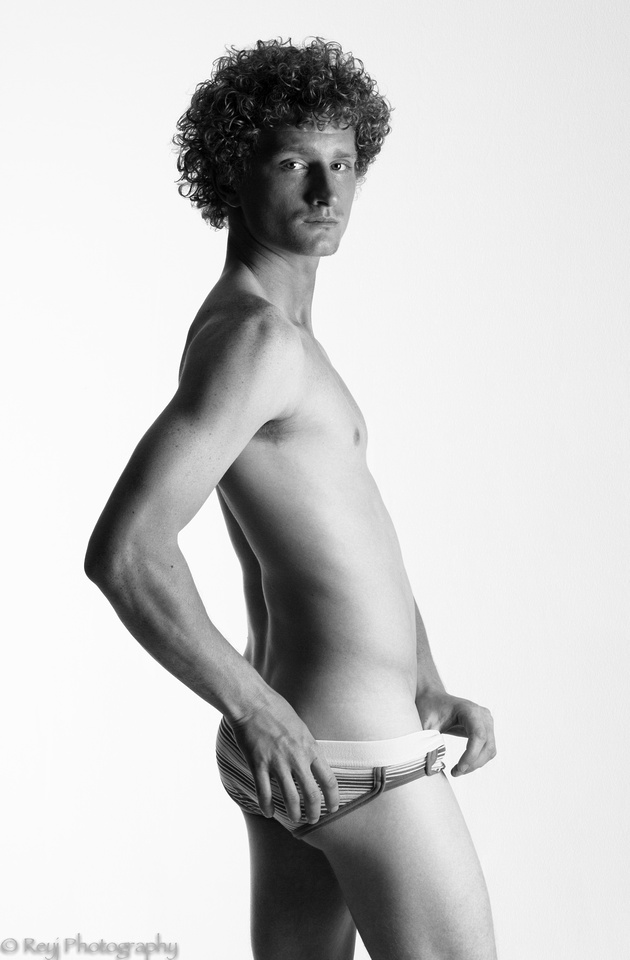 As with most photo shoots, it was definitely easy to select my favorite image from the photo shoot.  For me, I love capturing a moment in time.  In the image below, I was able to capture the moment that Robert was pulling off the button down shirt before leaving himself in just a pair of white Calvin Klein briefs.  While it definitely is a staged image, I love the moment quality that is evident with the piece of fabric fluttering down just to the lower left of the image.  For me, that sense of motion helps to elevate the image as a moment in time.

Additionally, I absolutely love the lighting in the image.  I love how the light is caressing the left side of his body as it wraps around from behind him while also highlighting the muscles in his neck as well as the veins his arms.  Furthermore, I love how the light sweeps through his gorgeous curls creating a mixture of highlights and shadows to create the separation of the individual curls. 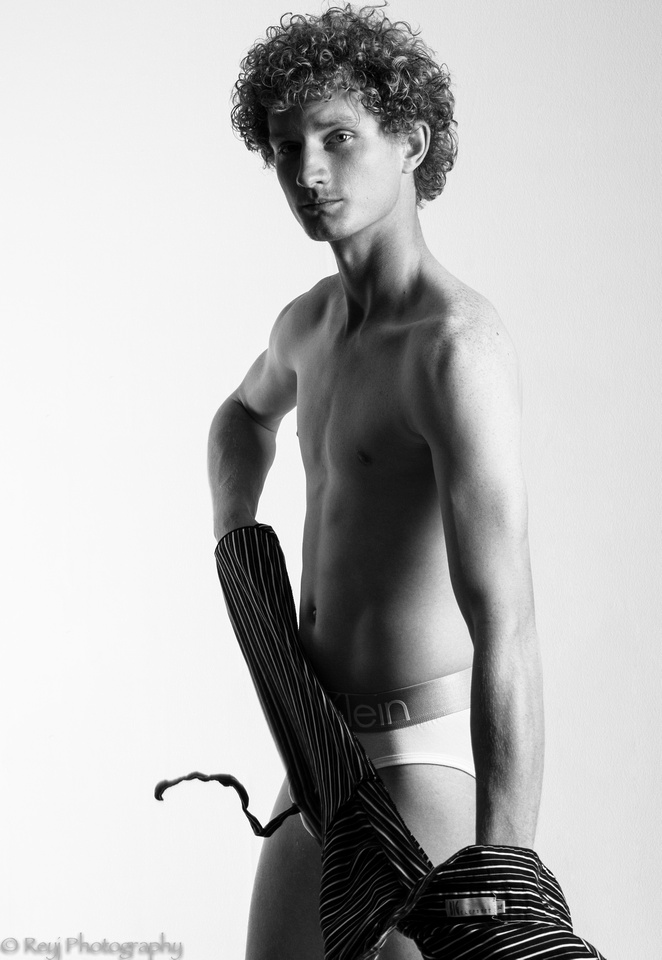 I was definitely happy to work with Robert throughout the photo shoot.  Of course, I was instantly drawn to him due to his features, particularly his curly hair, but I loved talking with him throughout the shoot and laughing at several of the comments and jokes passed between us.  Additionally, I'm definitely happy with the images that came from the photo shoot, including the ones not highlighted in the blog entry.  Of course, I'm definitely hoping to work with Robert in the future - hopefully at some point in 2016!

Again, thanks for checking out the website and the blog!  I definitely appreciate that you guys are taking the time to scope out my work!

If you want, you can also check out my instagram at http://www.instagram.com/reyj.photography.

If you are interested in setting up a photo shoot, you can reach me at [email protected].