Hey guys!  I know, it's shocking that I'm posting an entry roughly a week from my last one, but I have some time since I'm in the last few days of my staycation before heading back to my full-time job.  May was definitely crazy with the trips to Atlanta and Indianapolis, but June is turning out to be a lazy month - partly due to the two weeks of traveling in May.  However, I'm not entirely looking forward to going back to the job since I've been out for what is essentially a month and I'm not sure what kind of chaos I'll be leaping back into.  Still, it will be nice to interact with people after two weeks of just hanging out by myself and only speaking to fast food workers to place an order.  Maybe.

However, I definitely felt like I was squandering the time off since I didn't go anywhere or do anything remotely exciting.  It didn't help that it rained here in Texas for my entire first week off from work.  But, as I was cooped up in the apartment, I did spend a lot of time on YouTube watching music videos and how-to videos for creating visual effects for movies (not that I'm planning on making videos or movies in the future).  It was definitely interesting to see how simple some of those effects are, including the Harry Potter magic as well as Nightcrawler's teleportation (Film Riot's YouTube Channel - https://www.youtube.com/user/filmriot).  Not sure how I will use that knowledge in the future, if ever, but it was still cool to see how it's done.  But I did spend the majority of my time catching up and eventually downloading music that caught my interest on YouTube.

Anyway, since I have a few more days left, I thought I would go ahead and post an entry about my favorite images from the photo shoot with Jacob.

As you guys knows, I photographed eight different guys in a span of a week during December 2013.  It was definitely intense since I was trying to keep all of the shoots running on time and not overlapping with each other.  Of course, I'm definitely happy with the results from the photo shoots and worked with several interesting guys during that week.  Jacob was the seventh model that I photographed that week.  Throughout the photo shoot, I found that it was easy to talk with Jacob about pop culture related topics.  Sure, I was a little out of touch with some of the references since I didn't have a lot of time to stay current since I had been focusing on working full-time and attempting to complete my masters degree.  Still, I found myself listening to him and providing my input whenever I felt knowledgeable about the topic.  I definitely found it easy to keep up with the conversation while diverting more of my attention to the photo shoot and trying to capture interesting shots of him.

When Jacob showed up to the photo shoot, he was wearing these skinny black jeans and a gray sweater.  He definitely looked nice, but I changed gears when I found out that he was wearing a white A-shirt underneath.  For me, that has been such an iconic look ever since I first saw Herb Ritts's image of Richard Gere sporting an A-shirt and tight jeans in a deserted gas station (http://blogs.getty.edu/iris/the-photograph-that-kicked-herb-ritts-career-into-high-gere/).  Ever since that image, I have come to associate that look as typically American and sought to capture it whenever possible.  So, when I found out that Jacob was wearing that shirt underneath, I definitely knew that I was going to be focusing on capturing several images of him posing in that shirt and his skinny black jeans.

Normally, for this portion of the entry, I try and select an image from the start of the photo shoot to highlight the clothing and look that Jacob wore to the photo shoot.  However, the image that I wanted to highlight actually came from the end of the photo shoot as he was getting redressed in his clothes.  I definitely like that it feels a little like a moment in time as he's treading his belt through the belt loops of his jeans.  However, I selected the image based on Jacob's facial expression and overall feel of the image.

For me, I was definitely drawn to Jacob's boy next door looks, particularly his eyes.  When I was looking at the images in the catalog, I definitely stopped for several moments to evaluate the image and knew that it would be one of my favorites from the shoot.  Like I said, I was instantly drawn to his inquisitive facial expression and his wide eyes.  For me, there's definitely a sense of innocence as well as some vulnerability present within the expression.  Either way, it definitely causes the viewer to pause at the image.  At least, it causes me to pause each time I come across the image.

Of course, I do love the look that Jacob is sporting.  Like I said, I love the classic look of an A-shirt paired with jeans.  It definitely helps to highlight his shoulders as well as the lines of his body.  Additionally, I love the subtle tease that the viewer gets of the waistband and white cotton of his Champion boxer briefs.  It definitely helps to add an unconscious sensual quality to the image.  Yes, there's definitely a small thrill of being able to see his underwear in the image, but it's not anything that is overtly sexual.  It's part of the underlying sensual quality of the image that helps to make the image appealing to me.

Like I said, it was definitely easy to select the image below as one of my favorites from the photo shoot. 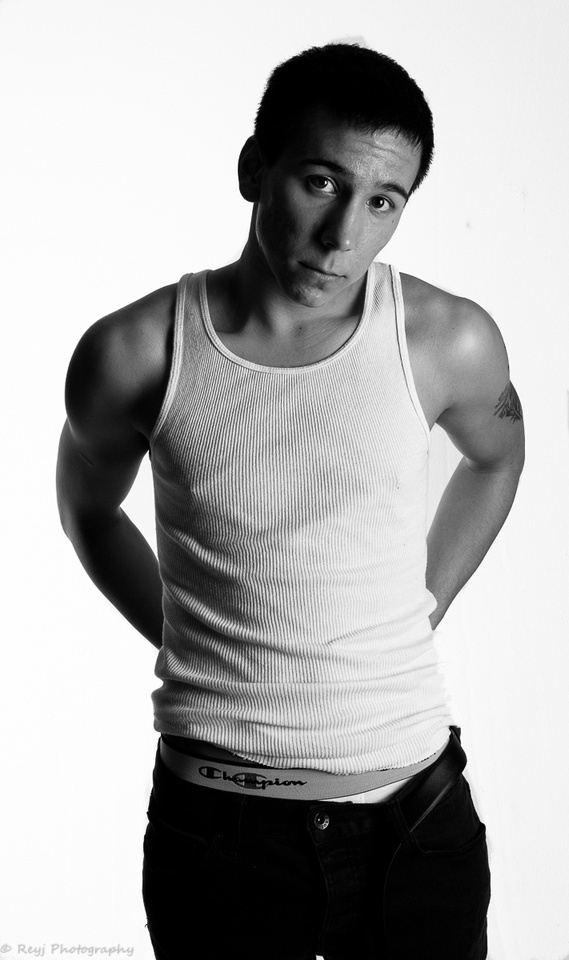 However, I was able to select one image that I wanted highlight during this portion of the blog entry.  Like I said, I was able to photograph Jacob in a black pair of Emporio Armani briefs.  When I gave him the option to choose a pair to model, he instantly went for the briefs and cracked me up a little.  However, I liked the way the briefs looked on him, especially how the gold eagle print added some depth to the image.

For me, I like the image because of Jacob's pose.  I like the twist of his body and how it creates some visual depth to the image.  However, I like the sensuality of the image from the position of his hips and stance to the placement of his left hand on his stomach.  It's definitely the tilt of his head and the pointed stare over his shoulder that caught my attention.  To me, that helps to make the image interesting and was the primary reason why I selected the image to highlight. 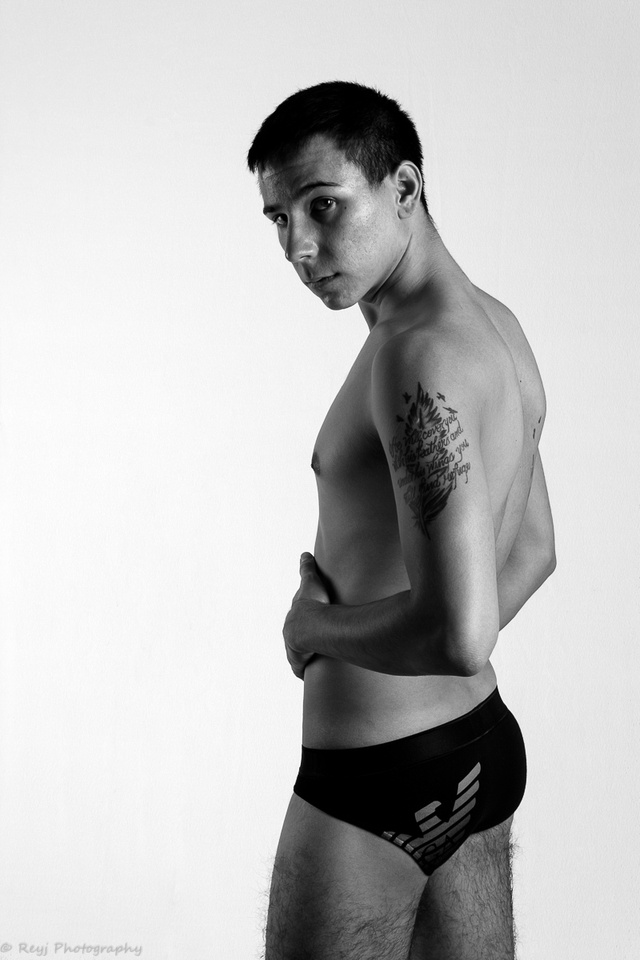 Throughout the photo shoot, I found myself capturing several portraits of Jacob.  Instead of highlighting my favorite nude from the session, I decided to highlight my favorite portrait.  As I mentioned, I was definitely drawn to Jacob's box next door look.  As I was going through the images, I constantly found myself stopping at one image.  It is a crop of an image that shows Jacob sitting in a white chair in just his Champion boxer briefs, but I found myself cropping that image to create the one below.

For me, I like the overall composition of the image.  Sure, I'm definitely a fan of the pose, but I like how the positive space (his body) works with the negative space (the background).  For me, there's definitely a sense of balance with his lower body in the right corner as well as his arm and captured negative space in the upper left corner.

Finally, I like his facial expression in the image.  As I look at the image, I find myself getting lost within the intensity of his eyes.  Like several of the other images in the gallery, there's definitely a seriousness present within his expression.  It's further enhanced with the lighting as it creates some interesting midtones.

Overall, I definitely love the image.  It was fairly easy to select this image to highlight for this portion of the entry. 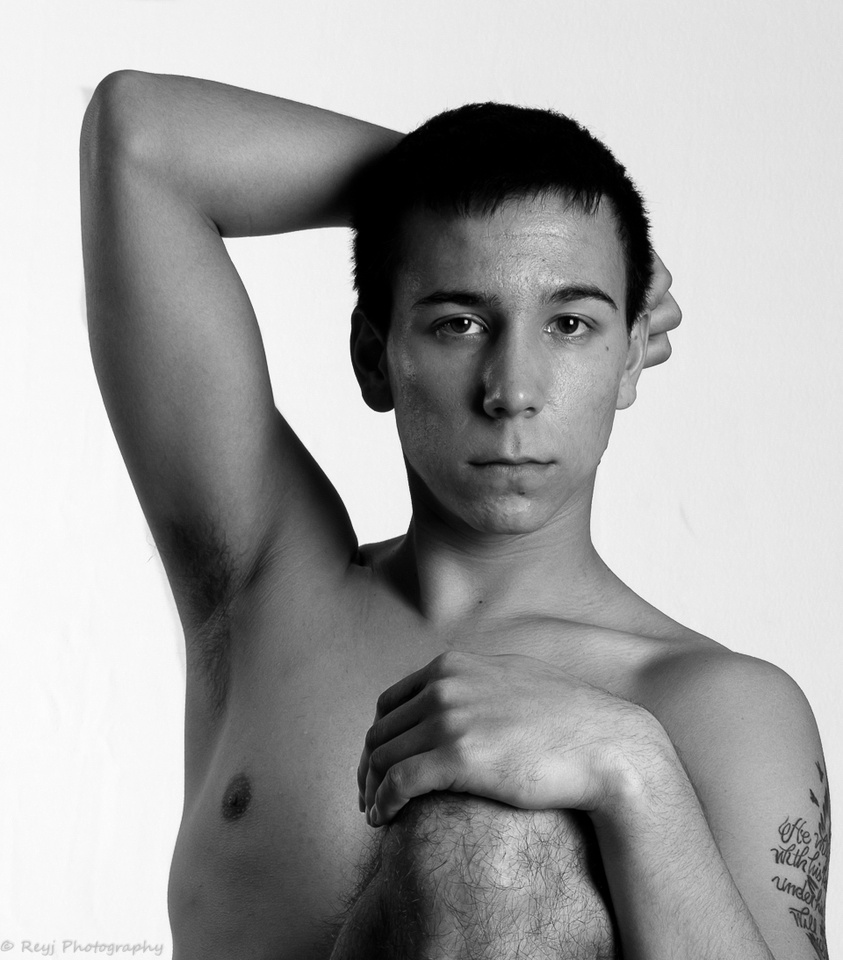 My favorite image comes from the beginning of the photo shoot.  Of course, it features Jacob wearing his A-shirt and black skinny jeans.  However, I wanted to pair that look up with a pair of black suspenders.  What can I say, I thought it would be interesting to photograph a guy wearing suspenders.  However, I selected the image as my favorite from the photo shoot based on Jacob's facial expression and overall pose.  I like how he's playing with the suspenders to help create some visual interest.  But it's facial expression that really seals it for me.  I like how he's looking off into the distance and has a somewhat serious expression. 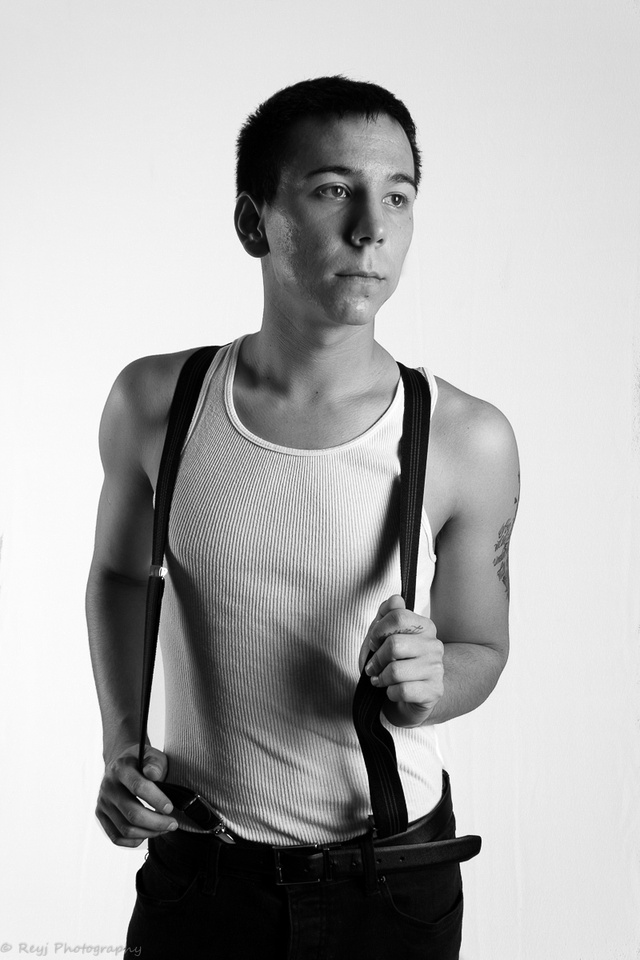 I definitely loved working with Jacob during the photo shoot.  I'm definitely happy with the images that came from the photo shoot, but I feel like there is still some additional work to be done with Jacob.  Like I said, it was only after the fact that I realized that I had only photographed him in just two types of underwear.  But I also think there are some additional images that I would like to get of Jacob that could potentially go beyond the studio environment.  Either way, I think there may be some additional images that I want to capture with Jacob that would lead to another collaboration.  As I get more grounded in 2016, I'm hoping that a potential follow-up shoot with Jacob could be in the works.

Again, thanks for checking out the website and the blog!  I definitely appreciate that you guys are taking the time to scope out my work!

If you want, you can also check out my Instagram at http://www.instagram.com/reyj.photography.

If you are interested in setting up a photo shoot, you can reach me at [email protected].