In January 2012, I joined a Meet-Up group focusing on photographing male models.  The subject matter definitely drew my interested, but it was a good way to actually practice the skills I learned during my first semester at ACC.  It was definitely interesting since I was a novice and felt overwhelmed by the thought of working with models.  I attended my first photo shoot with the group with some trepidation, but excited about the prospect of working with seasoned photographers and a somewhat experienced model.  The good thing is that the first model had worked with the group before and felt at ease with the other photographers in the group.

Kai #17 shows the feature that I've found myself drawn to quite often.  He has these intense blue eyes that always catch my attention.  However, I'm a fan of black and white images and often find myself working in that color space.  However, it caught me by surprise how intense Kai's blue eyes look in black and white images.  When I'm scrolling through images and move between a color image and its black and white equivalent, I am always surprise by his eyes.  And each time, I find myself stopping at the image and studying it again to find what I love about the image.  And each time, I end up at his eyes. 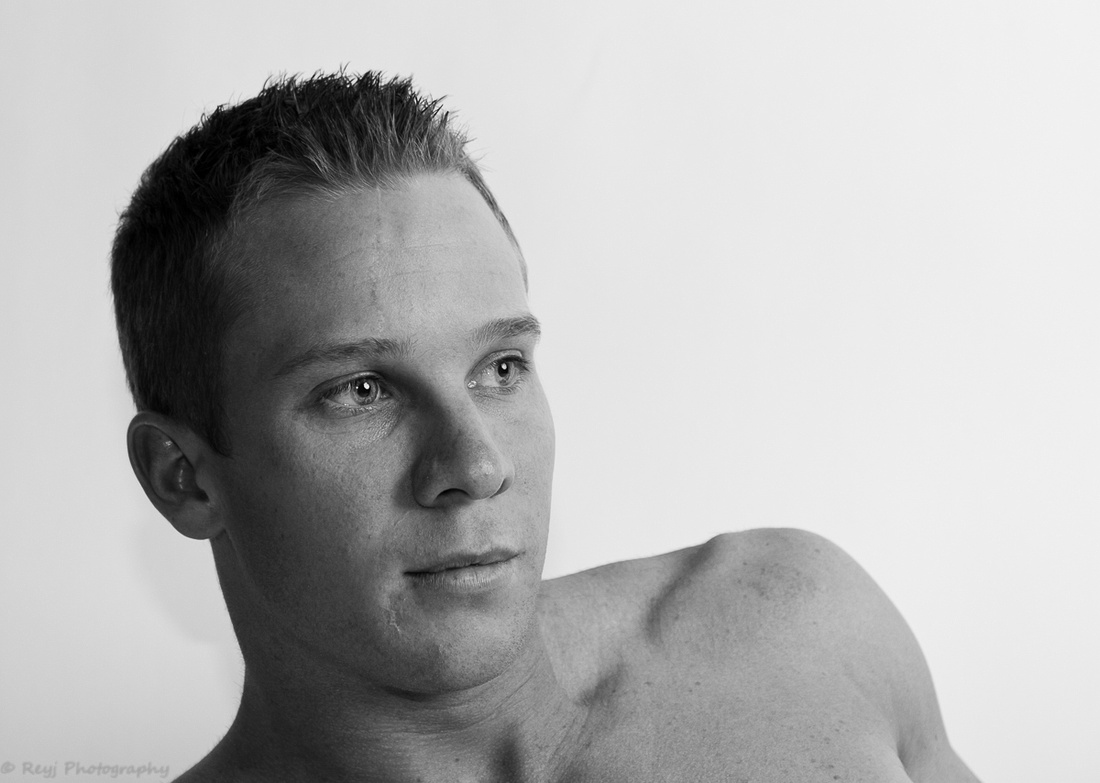 Kai 17Kai staring off in the distance.

The theme of the photo shoot was photographing the Athletic Male.  When I was in high school, the jocks always were popular and had everyone's attention and affection.  I definitely lusted after several of the jocks in my class and had a secret thrill whenever I had gym class.  Of course, I was also terrified at the same time of being found out.  However, my terror could not stop me from sending subtle, and probably not really all that subtle, glances at the jocks around me in various states of undress.  Of course, not many of them wore jockstraps in gym class.  Nonetheless, I have always made the connection between jocks and jockstraps.  As such, I definitely planned on photographing the model wearing a jockstrap.

Kai definitely fits the description as demonstrated by his physique.  However, for me, the athletic male was always defined by his attire, namely the jockstrap.  Kai definitely filled out his jockstrap very well and it lent to the erotic feeling of the photo shoot's theme.  As I said, since high school, the athletic male has always had a muscular physique and been sexualized by the jockstrap.  And I, following in the shutter clicks of many before me, photographed a gorgeous male model wearing nothing but a jockstrap.  Kai definitely did not disappoint as he pulled on the jockstrap and began following my instructions and getting into various poses that highlighted his muscular physique. 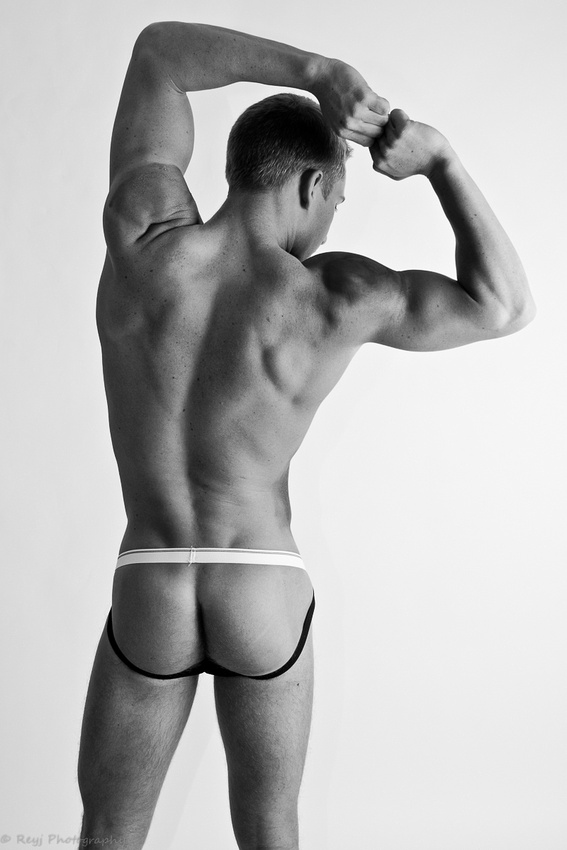 Kai 21Kai posing in a jockstrap.

However, again, I was caught off guard by one of the images that I took for Kai.  The image below shows Kai wearing a jockstrap and a white tank top.  The pose definitely shows off the muscles in his arms and his chest/back as well as his trim waist.  The image definitely has a sense of sexuality in it, but at the same time there is a sense of vulnerability within the expression.  I may have taken this image when he was caught unaware or I may have directed him into the pose - the details escape me since the shoot happened over two years ago, but I know that the image is one of my favorites because of that perceived vulnerability. 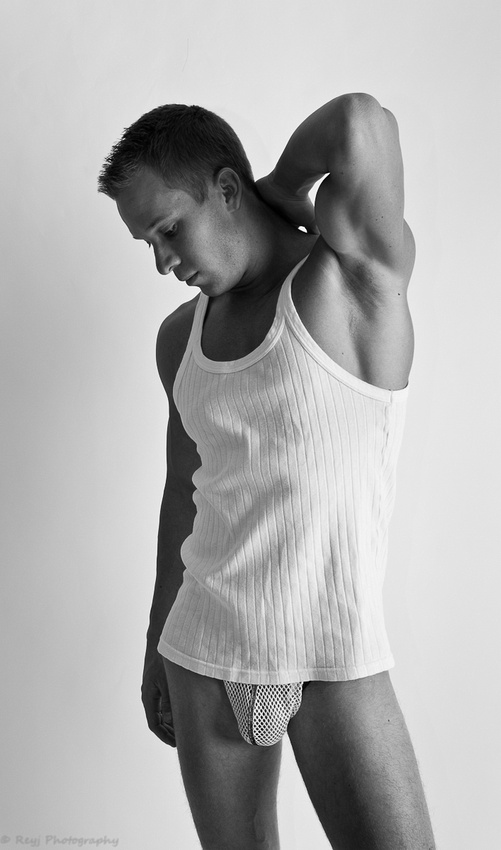 The other image that I have come to love from this series has been a recent fine.  I was looking through the images a couple of months ago and stumbled across the image below.  I originally worked the image, but didn't do anything further with it.  However, looking at the image again, I had the urge to edit the image a little further since there was something that was catching my eye.  Actually, it was Kai's eye that had caught mine again.  I wasn't fully impressed with the full color image, but there was something missing when I converted to black and white.  However, I found my happy median when I did a slight desaturated color wash on the image.  Once I did that, I found that the image popped.  Furthermore, it has been one of the images from the series that has become one of my favorites. 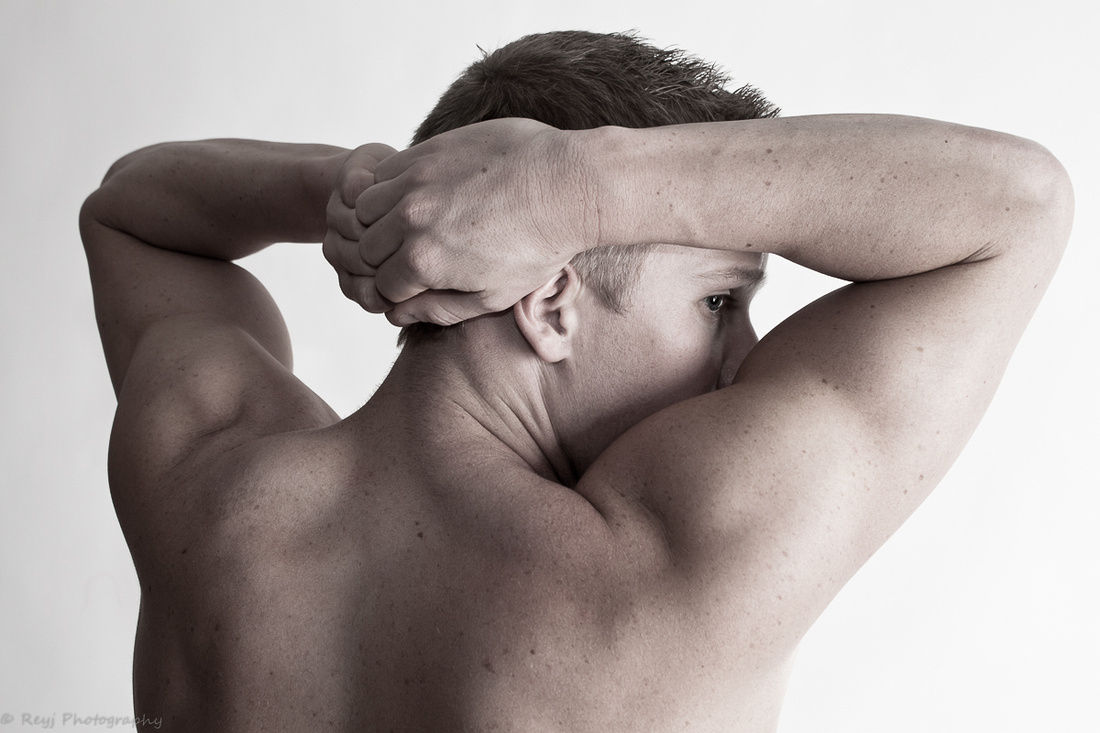 When all was said and done, I think that my first real photo shoot was a success.  As you can see from the gallery focus on Kai, I had several images that I deemed as a success.  There have been several images from the shoot that have become my favorite images and have been highlighted in this blog entry.  Furthermore, I have worked with Kai on another occasion and have plans to work with him again this year.  In the near future, I'll be submitting images from the last photo shoot with Kai and highlight those images that have become my favorite from that photo shoot.